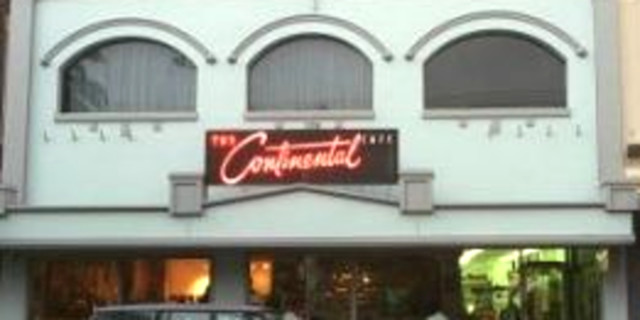 Melbourne’s Continental Cafe has been eulogised and tributes continue to flow in about this fine Melbourne venue as it moves towards closure. Yet Melbourne’s media is loathe to point out the Conti’s true culture. In today’s rarified, amphetamine-anger business atmosphere, there are few live venues around where the musicians not only get asked what they want to drink when they arrive, they’re either plied with joints before the show or offered one of the classic ten paper didgeridoos to finish the night. Soulman Rushdie offers this personal insight into a grand old gonzo institution…

Who can remember when that band Spain played at the Continental, and the band were so ripped by the time they took to the stage they had trouble figuring out whether to play their instruments, eat them or fuck them?

It was a classy moment… along with that American jazz guitar player with the local pickup band, asking quite honestly what song should he play next? Befuddled wasn’t the word. A request for a Johnny Red double later, and he was back in the game. Just part of the classy/seedy puzzle that makes up the Conti’s history.

See, as much as the Continental was an upmarket venue featuring everyone from the jazz avant garde to down home country and indie rock, it was also a shitty room where small people just plain couldn’t see the stage, you had to walk between the audience and the act if you wanted to get to the dunnies, and the beer was expensive. But the two Marios rolled the biggest, longest, smoothest joints I’ve seen since I took a wrong turn at Wooden Bong and ended up at Nimbin.

I was closely related to a Continental staff member during the heydays of the mid to late 90s. It was a beautiful tribute to the two sides of our culture – coiffured, tie-and-shirt serving staff, casually making their way around the room grabbing glasses and attending to the Dinner and Show mob before popping out onto the fire escape for a big arse tug on the endless joints rolled throughout the shift. This, of course, in between wolfing down a few hash cookies and whatever other miscellaneous goodies other staff members had brought along to share with their workmates.

Hang around for the post-show chillout, ciggie and drinks sesh and you were liable to witness classic Pro Rollers in action, engaging in conversation and not really paying attention to the cluster of papers, backy and weed in their hands until the final Lick stage of the construction process, in which a baseball-bat protruberance was suddenly proffered, commented upon and lit.

That was the deal – if you rolled one, be prepared for some serious critical reviews, as these guys never held back. “Why don’t you wrap another fucking paper on it and call it a Christmas present?” “He’s rolled a hunchback” “Anymore holes in it and I’d play a tune on it for ya”…

That’s also what made the Conti such an anachronism. Venues run by dope fiends are, as a rule, generally crap, disorganised and prone to ripoffs and collapse. The Marios not only sound like charcters from some film that’s never been made, they ARE the Continental (can you hear me Gudinski, you fuckin vulture?). It was their masterful management, gig choice and obedience of The Vibe that made musical experiences there seem slightly out of this world.

Of course, it could well have been the lighting.. oh, the lighting. One man in a cloud of smoke in a tiny little room creating whole galaxies in and around the musicians on stage – legend has it the lighting guy was THE guy who took to the stage at the Woodstock festival and decried the values of the Brown Acid.

Or the people. Triple R DJ Tony Biggs performing a slow motion standing to faceplant transition without once moving a muscle. Then claiming loudly he’d found twenty cents. Another RRR DJ, Max Crawdaddy in one of his many DJ gigs, dropping musical bombs on folks when most venues were prepared to serve up generic mix tapes/CDs before a show. Saucy bar staff of either gender with brains AND attitude (a rare combination for venues in Prahran).

Ahhh, the Continental. So classy, so glassy, never nasty, just right. Except for getting to the dunnies while the band was playing.

So long, and thanks for all the spliffs.