Last April Australian animator Felix Colgrave released a short called Double King. The film follows a mysterious king on a quest for power and glory that is so single-minded it ends up destroying not only the king, but also nearly everyone he interacts with; it was immensely popular upon release and has collected 9.6 million views.

To celebrate the anniversary of his work, Colgrave released the music for Double King, including two electronic remixes of songs from the haunting, otherworldly score. 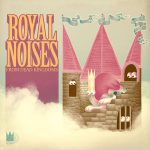 Colgrave’s animation is beautiful. It is alternately stark and lush, full of repeating patterns and startling aberrations and the score, Royal Noises from Dead Kingdoms, mirrors the hypnotic visuals in its layered, thoughtful construction.

The songs range from electronic textural pieces to ominous chants and neoclassical compositions. “Hæm” is a drone-y psychadelic piece with fuzzed keyboards and a meandering sound, and it is shortly followed by “Dinner with a Skeleton,” a fussy, discordant harpsichord minuet that dissolves into a jazzy piece for xylophone and musical saws. Most of the pieces are quite short; the only songs that clock in at over three minutes are two remixes that finish the album and push it from a simple score into an interesting piece of experimental electronic music.

The last two songs are danceable, operatic, fun, and tragic, sure to confuse and delight your friends the next time someone makes the mistake of passing you the aux cable. The album as a whole is a fun and bizarre listen, the score is respectable ambient music while the remixes should be the soundtrack to the weirdest parties you show up to this year.

Also it should go without saying but you should go subscribe to Colgrave on YouTube — he’s one of the most interesting independent animators working right now and he’s well worth following.