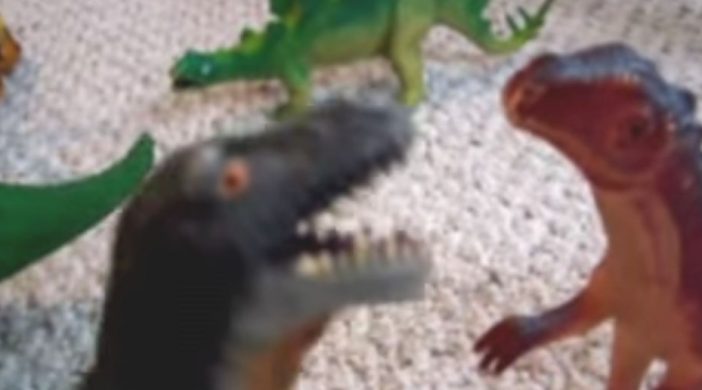 Here’s something instructive: YouTube: A Dinosaur Story. That’s a three-hour movie done by two kids in their loungeroom with toy dinosaurs. Ridiculously low production values, make-it-up-as-we-go-along story by a couple of kids who seem to be about nine or ten. It’s genuine unintermediated young children’s folk culture, on the internet. HOLY CRAP. PUNK ROCK FOR EVERYONE.

The reason this is noteworthy: it’s one of my five-year-old’s favourite films. She’s watched her assorted Disney DVDs about half a time each, she’s watched this movie repeatedly and tells bits of it to her classmates. I boggle, but I cannot deny the observation that they’re doing something right that Disney isn’t, on a budget of zero.

She was also incredibly excited when she saw YouTube videos of kids making Thomas the Tank Engine fan videos using wooden railways just like hers. “They’re making their own stories!” (Example. Of course it’s rubbish. That’s not the point.) The powerful drive for a culture of your own starts early.

The recording industry used to try to justify not being taken out and shot by claiming blockbusterism was necessary to music, which was of course just a lie. Bands can (and do) now do albums with a microphone and a laptop. Microphone optional. Record at home, put it up on Bandcamp, the physical barrier to recording and distribution is gone. I remember the eighties, and just how bloody hard it was even to record, let alone distribute the result. Sure, the studio result is better, but that’s optional now. For getting the damn song out of your head and into the world, convenience beats quality every time the two are head-to-head.

Culture is everything humans do to impress each other, and it’s diseased unless it’s owned by all of us. The arrangement where you have creators here and consumers here and never the twain shall meet is a twentieth-century perversion we are well rid of.

One thought on “No, film is not in unique need of blockbusterism.”