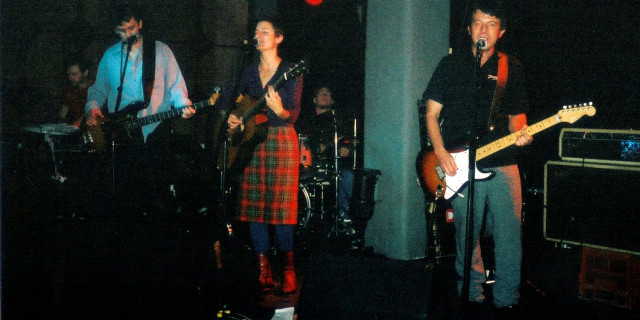 Missed the first band, Grandview, who started unnaturally early. (Nine or something; normal start at the Cornish Arms is apparently 9.30, we arrived just before ten).

The Cornish Arms is a nice little place. Austere grey concrete floor and a bit cold, but excellent sound (clear vocals) and Cooper’s on tap. Well laid-out, the stage being on the long side of the room rather than the short end. (You’d think that obvious, but so many venues can’t be bothered.) Intimate, but not cramped.

Entered to the sounds of Fibrotown. I generally find country tinges in indie rock a mild but persistent annoyance: what indie rockers slip into when finally running out of ideas. Not everyone can be the Blackeyed Susans. (And there are many who would include them as well. But they’d be just wrong, because any band that can use the power of country to turn ‘Private Dancer’ into a good song knows what they’re doing.)

But this band, unlike those bands, are a well-plotted piece of non-claptrap. There is such a thing as good countryfied indie rock. The crowd getting into it helped – all the fans out on the floor – and the band are indie cute — Nicky was particularly taken with the girl with the glasses. A particularly good set for them. I liked this a whole lot.

Bought a Jodi Phillis CD. I seem to be buying CDs at shows a lot lately. Cover looks like dodgy indie My First Photoshop Puke (let’s press ALL the buttons!), but the content is certainly up to scratch, and the production and playing is suitably polished. No bludgeoning Clouds-like A-sides on the first few listens, but lines like “Nothin’ shii-its me as much as when a good dream won’t come true” (‘For The First Time’) make up for that just fine.

Jodi and her band are pretty good. The music sounds exactly like what you’d expect, i.e. the next record from the Clouds’ songwriter. Guitar rock with the songs themselves being the important thing. Though more low-key and mellow, not the pop power trio the Clouds were on their final tour.

Way more polished than your typical indie show, thank God. I liked the keyboard player sitting behind his technostack and just playing tambourine. The drummer was having way too much fun time as well. Not as dynamic a thrill as Fibrotown, but that’s just unfamiliarity working to Fibrotown’s advantage. This set too was damn fine and Jodi is well worth not missing.

Jodi wears a V-neck purple top (long sleeves pushed up) and a tartan skirt. Black stockings under patterned blue ones, plain burgundy boots. I know about the stockings because Nicky went up and asked her. Just in case you were wondering why Jodi stuck her leg out in mid-air at one point for no apparent reason.

I dunno, all the cute indie rock chicks out tonight …