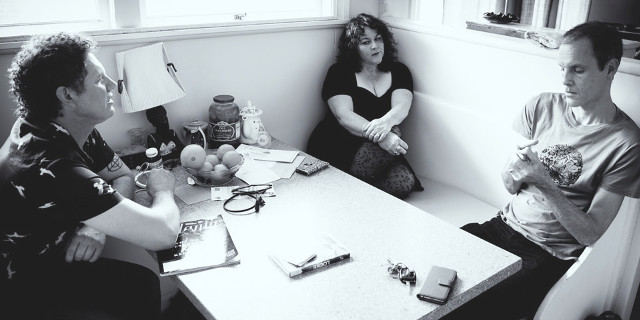 The power ballad is one of the finer sprouts of the hard rock’n’roll tree. When the adolescent males have slammed, stagedived and pogoed their little hearts out to your fast ones, going up to four (or even five) chords (on acoustic, of course) with that big, slow “thump … tha-THUMP … thump … tha-THUMP” drum line will cement your cred as a truly great writer of truly moving songs and not just another spandex-clad, fretwanking attention-seeker searching the front row for male adulation and female lust dumb enough to lead to a night with you.

As a musical form, this heavy metal/cabaret pop crossover’s spread into the ‘alternative’ field has enabled a host of single-riff bands to say that, yes, they are real and deep songwriters of the kind that will live off their publishing for the terms of their natural lives, since it’s now a well-known fact that selling a million records through a major will probably leave you deeper in debt than selling a hundred thousand, let alone what you got selling four tapes a night at the Empress.

A power ballad must be:

NICK CAVE AND THE BAD SEEDS: “The Ship Song” – Before I die, I want to hear Tom Jones doing this one. Preferably backed by the Bad Seeds themselves. Just picture it.

NIRVANA: “About A Girl” – On Bleach, Nirvana were trying to be a pop band (the Smithereens, to be precise), a rock’n’roll band and an MRR-reading hardcore-scene band all at the same time, which is why it’s such an incoherent album. Thank God they finally caught on and started ripping off the Pixies. This one is the Smithereens as done by Bon Jovi. Note the deliberately broken-up beat at the beginning … specifically designed to make it sound a bit less un-punk.

SCREAMFEEDER: “Wrote You Off” (from Burn Out Your Name) – Whenever an indie band writes a power ballad (in this case a pop power-ballad), it’s the song everyone picks as evidence of a new maturity and a possible hit. The band then goes through the hell of trying to write a second one anywhere near as well-done. This track made at least three various artists compilations.

YOU AM I: “Berlin Chair” – I’ve actually seen the JJJ-yob engineering-student stereotypes up the front punching the air to this one, y’know.

TRIFFIDS: “Stolen Property” (from Born Sandy Devotional) – A slow and atmospheric-sounding epic always sounds good in a stadium, and is more epic if it essentially has only one phrase.

you can tell this was written in 1994