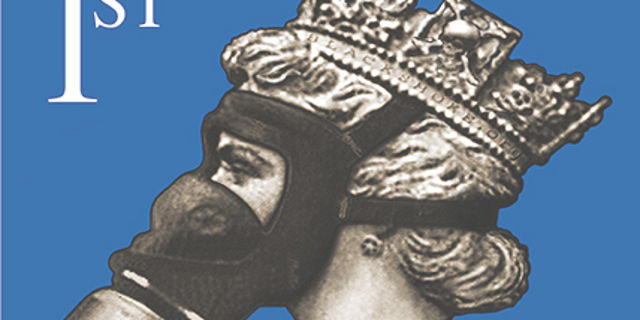 How much money did the KLF make? Where did it all go? Is Bill Drummond really as crazy as Julian Cope says? Ex KLF-er James Cauty — the man behind the now pulled from gallery walls Stamps of Mass Destruction and a mass of top 10 pop hits about icecream vans — answers all these questions (except the last one) and more …

Why put the queen in a gas mask?

To protect her from chemical biological nuclear accident or attack.

Why make the transition back from music to visual art?

I think I used up my allotted quota of musical ideas, I reckon I have about another 15 years worth of visual stuff to offload before that runs out, although there is some residual unfinished musical business with Blacksmoke.

Are there cultural differences between the two art forms and their associated industries?

Not so long ago ex pop stars were banned from the art department (for good reason). Not so much these days though, everything has meshed into one giant global multi headed media monster hungry for anything interesting.

In reports I’ve seen, your art gallery says that you have completely re-drawn the image on your stamps – is this right?

Why should you be allowed to sell artwork based on the Royal Mail’s intellectual property?

Are IP laws having an effect on people’s ability to create culture?

IP laws were invented by lawyers not artists.

Why do you think the Royal Mail is so outraged anyway? Your works seem like a pretty clear-cut case of parody.

I don’t know. There’s no dialogue with RM, I have no idea who they are or how many of them there are, we just get threatening letters from their lawyers. I would be interested to meet these people one day and find out what the problem is.

This is not the first time you’ve had intellectual property hassles — the JAMS’ What The Fuck Is Going On got you in trouble with ABBA. Have the legal problems with IP gotten better or worse since then?

As someone who has worked in the copyright liberation field for a long time, what did you think of the act that was doing the rounds several years ago that called itself the KLF, but didn’t feature either Bill Drummond or yourself?

Hmmm … I actually felt more sorry for the band than the audience. We did write to them to ask them to reconsider and got this amazing letter in return, they really thought they WERE the KLF, and without the Wanda Dee sample we would never have sold a single record. 9 out of 10 for total insanity.

And what about Scooter, who continually quote your KLF work?

Ha … LOL. Good old Scooter, I was surprised they took so long to get round to it. They’re like some sort of tribute band … I really like them, shame they’re so ugly.

Your new band, Blacksmoke, seems much angrier and more overtly political than the KLF – why is this?

Don’t know why … just some unfinished business I guess the idea is you listen to the EP ‘kittens of mass destruction’ before going out on a riot, just to get you in the mood.

I notice you’re still talking about vans, though – are vans an obsession of yours?

No that’s Gimpo’s obsession – we just document his activities.

Blacksmoke seems mostly about oil and power politics – is that a fair call?

The EP KMS is mostly about Gimpo and America.

Who else is involved in Blacksmoke?

It’s just me and this heavy metal maniac called James Fogerty, he writes the basic stuff in his parents’ basement in the middle of the night. I deconstruct it and apply a Blacksmoke template, mix it and package it for the mass market. There’s also Kier our project manager who hates the music business and refuses to use the telephone. Quite a brilliant team I think.

What chance a KLF reformation? Could you be tempted by lots of cash, Sex Pistols style?

We’re actually headlining at the ‘end of the world’ gig at the Pyramids. Dates to be announced. No fee necessary.

Is Bill Drummond really as mad as Julian Cope makes him out to be?

What do you think of his How To Be An Artist show?

Gimpo showed me some of the footage the other day … I hope he buries it deep, these things have a habit of resurfacing, we buried our Brit award at Stonehenge and a farmer found it and handed it in to the police. We had to do it again.

When you burnt a million pounds, could you really afford it?

Related: did the KLF actually make you and Bill Drummond much money?

I think musicians make far too much cash for just sitting around in recording studios all day smoking dope. we never set out to make money, I think we made about £6M. We paid nearly half that in tax and spent the rest on production costs. When we stopped the production costs stopped too, so over the next few months we amassed a surplus of cash still coming in from record sales, this amounted to about £1.8m. After tax we were left with about £1m. This was the money that later became the K Foundation fund for the ‘advancement of kreation’ it was also the raw material for ‘Nailed to the wall’ (MONEY A MAJOR BODY OF CASH) – The rest you know.

Will the Extreme Noise Terror/KLF collaborations ever see the light of day?

There is a bootleg flying around. I haven’t heard it. I thought I had the only copy, but I guess there might have been another one made.

As the KLF, you had a string of hit singles, none of which were much like the album tracks and none of which had a conventional pop narrative – instead, they constructed an entire cartoon mythology/world. Why do you think you got away with it? What made it work?

I don’t think we would have got away with it for much longer. The LP tracks were different because we released the LP about a year too early. I think it worked because we really meant it.

And how did you convince Tammy Wynette to work with you anyway?

As a past master of manufactured pop, how do you rate the present bunch?

I don’t really pay that much attention these days.

Back on the copyright front – is theft and appropriation an important part of art?

Are you aware of Microsoft and others’ attempts to use digital rights management to control the way people can use/abuse/reuse audio, video etc on their computers? If so, what do you think of this trend?

I’d like to see the total collapse of the music, TV and film industry, I noticed Metallica got upset about the Napster thing. Their argument is that they should get a royalty every time someone downloads a track. Isn’t that like the plumber getting royalties whenever you turn on the tap? I think if I was in a band I’d tell the record company to fuck off and release it all free on the internet. Just forget about trying to make money and just concentrate on the music.

Finally, as the artist who created a fairly famous Lord Of the Rings poster (still available – I checked!), what do you think of the movies?

Fairly famous??? I cant stand all that pixie shit, I know I helped propagate it in the 70s but … this man told me to do it. It’s funny, poster sales have dropped off dramatically since the film came out … people are saying hang on your poster doesn’t look like the film … fair comment, I agree.

This interview was conducted for a feature in an upcoming issue of The Big Issue Australia.

2016 note: This was recovered from an archive of old rocknerd.org posts. I’ve mostly left Ben’s old stuff off Rocknerd v3, but considered this well noteworthy enough to make available once again.