Dion McGregor was the most prolific somniloquist in recorded history. A somniloquist, or voluble dreamer, is a person that talks during their sleep. Dion is unique due to the way in which he sleep-talked. Rather than mumbling random incoherent words like most sleep-talkers, Dion narrated his dreams eloquently at a conversational tone, making them an incredible and surreal experience for the listener. 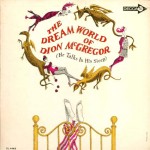 Through the 1950s, Dion McGregor’s roommate Mike Barr got up at seven o’clock every morning and taped Dion’s surreal narrations; in March 1963 he passed on 150 tapes of material to Nancy Green, who in turn played them to her husband Jules L. Green. Struck by the surreal yet coherent nature of the material, Green sold the idea to Decca of releasing the material as an album; and in 1964 Decca released The Dream World Of Dion McGregor (He Talks In His Sleep).

Out of 150 tapes’ worth of material, 10 tracks made it onto the album – and you can download the tracks as MP3s here. There is also a MySpace page.

4 thoughts on “The dream world of Dion McGregor.”