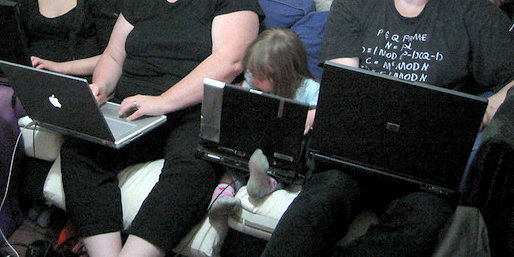 Dot.com winner Paul Graham writes on why TV lost — computers + television = computers. Of course as much is watched as ever, but the products (you and me) are getting entirely too uppity for business comfort. The broadcast model is as healthy as major record companies.

I work in media. The future of television is YouTube or similar. We know this. It’ll take a few years before the Internet is a better television than television, i.e. when your connection is a better delivery mechanism than DVB-T over the air. On the other hand, convenience beats quality every time.

We each sit comfortably in the lounge on our own laptop, watching videos as the whim takes us. The younger teenager uses YouTube as her personal jukebox. Even broadcast television (BBC CBeebies for the toddler) is streamed live over the net. I have a television, and proudly pay my licence fee. I can’t remember when I last switched it on.