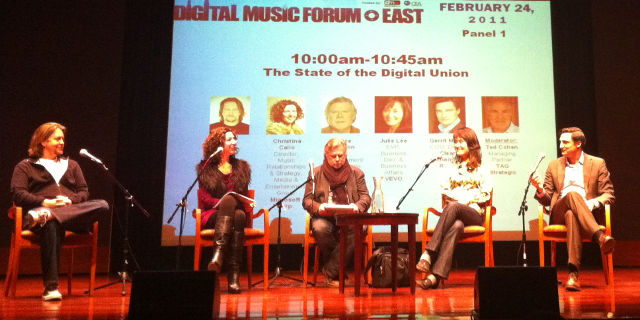 My house has teenagers in it. They are actively interested in music, read Kerrang! (which is now a land of sensitive boys with floppy fringes ripping off bad Metallica solos) and are in every way the desperately desired target demographic of the music industry in general. They own a few precious favourite CDs, but mostly they get music off YouTube. They use it as their jukebox. Quite a bit from official label channels.

The execs have finally noticed and, as usual, are channelling their inner Gollum. Streaming services (YouTube, Spotify, Pandora, last.fm) are now considered a bigger problem than piracy, because they’re not the cash cow CDs were. Note that this is the legal and paid-for channels they’re complaining about.

The kids don’t listen to radio, or any similar rigidly controlled stream fed to them on a provider-consumer model. The execs’ dilemma now is how to advertise the music without people being able to hear it. Or something. Analyst Russ Crupnick suggests creating some form of “artificial scarcity.” Let me know how that works out for you.

“We never really made the digital transformation,” says Crupnick. No shit.

2 thoughts on “When you stream, you’re streaming with piracy!”