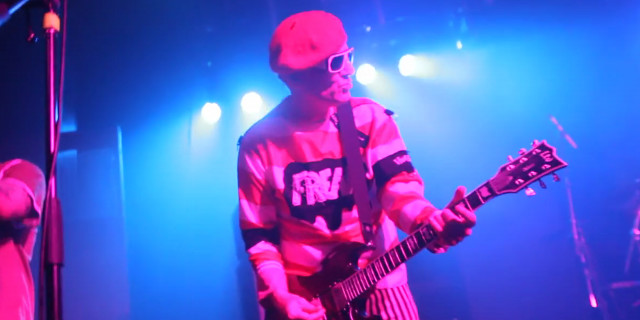 In previous reviews the general superiority of Billboard as a venue has been mentioned and they remain applicable here; the light is better, the sound is good, the floor-design is excellent and they actually keep the place at a moderate temperature. With an audience of the usual suspects, The Damned came with two support acts. The first was some clown (I mean a magician) who didn’t like the fact the audience were indifferent to his tricks; the accusations of being on heroin and being a bunch of grey-haired “fruity arses” are obviously designed to endear us to the performance. To be fair ‘Dr El Suavo’ did have a cool mask and a stylish assistant, but the act and customer relations is going to need some improvement.

The other support was the young Kill City Creeps who played competently and enthusiastically – and displayed more than a degree of adoration to the band they’ve come to support. It should also be noted that the intermission between the acts included some of the most awful moog music that has ever been created. A fellow attendee, well versed in such things, dutifully informed me that The Damned do this deliberately to remind their audience how bad music had become and why punk was necessary.

And what a necessity they were; The Damned, heralding from the dawn of punk rock, the people who released the first punk rock single (“New Rose”, 1976) have attracted more than a small crowd of fans over the years. Described by some as “Gothic Punk”, it is my considered opinion on the subject that there needs to be an ampersand between the two words in this case, to differentiate it from “gothic-punk”. Lead vocalist David Vanian, once described by NME as “a runaway from the Addams Family”, certainly fulfils the first half of the equation, with guitarist and occasional political organiser Captain Sensible fulfilling the latter. Old-timers certainly miss Rat Scabies (“let there be rats!”), although relative newcomers Monty Oxy Moron (keyboards), Pinch (drums) and Stu West (bass) were certainly warmly welcomed. OK, they’re not that new; Monty’s been in the band for fifteen years.

They started powerfully pounding out the first three tracks from “The Black Album”; ‘Wait for the Blackout’, ‘Lively Arts’ and ‘Silly Kids Games’. The fourth song in that sequence – which must be recognised as the one the best four-part meldleys in modern music – ‘Drinking About My Baby’ was played later in the set. Yet even at this stage there was a note of warning to my ears, that the sound was no quite at the standard that it should be, that the mixing wasn’t quite right. Yes, there is an inevitable roughness to live performances – and punk rock can thrive on that – but there are some subtle sounds to The Damned as well, and ‘Wait for the Blackout’ didn’t quite have those noises.

My concerns proved justified when latter in the gig tracks from their mid-eighties gothic period, namely the hit ‘Eloise’ and ‘The Shadow of Love’. Of course they were still great songs, and the crowd lapped them up as expected whilst David Vanian went into the crooner mode, but they were lacking some of the finer points of his melodic vocalisations.

On other tunes however where a higher degree of roughness is to be expected this wasn’t an issue; whether one ranges from the string of favourites including ‘New Rose’, ‘Love Song’, ‘The History of the World’, ‘Neat, Neat, Neat’ (I admit – my least preferred Damned song), ‘I’m Bored’ ‘I Just Can’t Be Happy Today’, ‘Anti-Pope’ and the signature conclusion, ‘Smash It Up’. The crowd adored their performance; there was pogoing, crowd-surfing, and slam-dancing, there were cheers and chats with the ever conversational Captain.

It should be mentioned that Captain Sensible did also suggest Happy Talk as their concluding song, after all it was the most successful single from the band and its members somehow reaching number #1 in the UK for two weeks. My innate sense of musical perversity and appreciation of its brilliant combination of irony and genuine intent would have certainly supported such a decision, but I suspect this would be a minority viewpoint.

Overall, The Damned certainly showed that there’s more than a little bit of life and passion in the band and among their fans as well. As a 35th anniversary tour, they also have a wealth of experience as well as well as a small mountain of popular songs among their fans. Attending on my the eve of my own 44th year really reminded me that they’ve been part of my personal narrative as well; after all I did name a sf fanzine ‘Phantasmagoria’ in my teenage years. Yeah, I guess they did leave quite an impression on me – and continue to do so today.

Note: Sludge Factory have an awesome set of pictures from the gig.