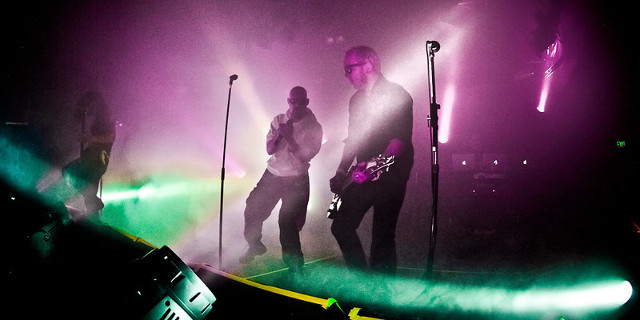 The “industrial groove machine” known as The Sisters of Mercy recently performed twice in Melbourne at the Corner Hotel and apparently also at the Soundwave Festival. The crowd was a good mix, but mainly of goth aficionados from the 1980s when the band reached a high-point of popularity, with the albums First and Last and Always and Floodland.

Whilst the band has performed fairly much constantly since being founded in 1979 it has been a long, long wait since 1990 when the last studio album of new material (Vision Thing) was released. The Sisters have been “on strike” against WEA subsidiary EastWest records, despite providing new material at live concerts. This review was written whilst listening to the unreleased SSV album which was accepted by EastWest because it contains a few sampled vocals from Andrew Eldritch. It is not nearly as bad as one may have been led to believe, but rather serves as aural wallpaper at best.

The show opened with Kim Salmon, who provided local punk-blues talent. I’ve followed Salmon’s career with some interest for more than twenty five years or so, because I keep on ending up at his concerts, initially with The Scientists, then Beasts of Bourbon, then Kim Salmon and the Surrealists. I swear that I went to one gig that was advertised as “Kim Salmon and the Fish” just after the Surrealists phase, but either I was in a parallel reality at the time, or my google-fu is utterly failing me. There was a time when I though that Mr. Salmon was a little disappointed that his positive critical reception had not translated into deserved fame and fortune, but he seems at least somewhat content with his lot as being recognised and appreciated among a smaller and discerning audience. Salmon played a short (30 minutes) but enthusiastic solo set which one supposes was the idea of a support act, which is stretching the definition of the word. As a hint of things to come, the sound quality was not the best.

Presenting themselves in a haze of smoke and light, and on the dot as far as time goes – a rare commodity in the live music world – the crowd naturally greeted The Sisters with enormous enthusiasm. Consisting of the venerable Andrew Eldritch on vocals (and causing some raised eyebrows on his idea that a white hoodie was appropriate attire), enthusiastic guitarists and backing vocals from Chris Catalyst and relative newcomer Ben Christo, the band is much helped the latest incarnation of Doktor Avalanche. Christo is particularly notable for his youthful looks, kinetic energy, and a strong propensity to pretend that he’s actually in a metal band. Direct crowd interaction was far from overbearing, but it was quite clear that the band was very much playing for their audience.

Which is possibly just as well, as the first thirty-seven minutes of the concert was absolutely appalling. Not for the first time, the questionable acoustic qualities of The Corner Hotel were matched with a mixing quality that frankly was not up to an acceptable standard. Some years ago, the same venue managed to turn what was an otherwise good gig by The Buzzcocks into an audio train wreck; in some instances this was worse. Classic songs (in order performed) such as “Ribbons”, “Detonation Boulevard”, “This Corrosion” and “Dominion” received popular audience response as could be expected, but one scanning the crowd could also see that up to half had the confused look on their face that expressed “What the fuck is that?”. The juxtaposition was strongest in “This Corrosion”, perhaps the most well-known and successful hit of the band. On one level many members of the audience were quite enthusiastic. Yet, with eyes closed and concentrating on the music itself, one came to the conclusion if they hear this on a home sound system, they would consider the medium damaged beyond use.

There were some exceptions; an uninspired “Marian” droned on harmlesslessly, and the heavy reliance upon Doktor Avalanche on “Giving Ground”, resulted in a more successful sound. But as mentioned, at thirty-seven minutes past the hour, and about at the half-way point of the gig, the band paused for a moment, Eldritch muttered a couple of words of complaint, and the show restarted with some notable improvement. “Alice” came across with a greater degree of clarity, as did the somewhat challenging “Temple of Love”, “More” and “Lucretia, My Reflection”. With the show concluding on a reasonably well-executed rendition of “Vision Thing”, punters could leave feeling at least something was rescued. Overall however this was a very ordinary show and a reminder, once again, to avoid The Corner as a venue.