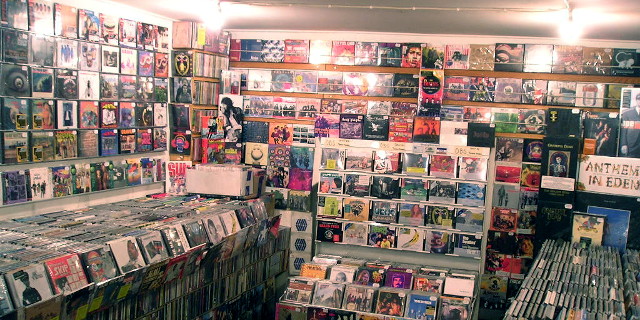 Record companies complain the Internet will destroy music. Musicians complain that they can’t make a living any more. The unsympathetic public, feeling the squeeze themselves, tell them to get a proper job.

There is too much music and too many musicians, and the amateurs are often good enough for the public. This is healthy for culture, not so much for aesthetics, and shit for musicians. Musicians in the early ’90s were already feeling the pressure of competition from CD reissues of old stuff; here in the future, you can get almost anything that has ever been digitised for free and listener time is the precious commodity.

This article is not about the majors or rock stars, but about the indie musicians and labels watching the waterhole dry up and wondering what the hell happened.

There is no shortage of genius works.

As Gwern Branwen notes, culture is not about aesthetics. There are too many brilliant records. There are too many brilliant books. He does the numbers to demonstrate the impossibility of keeping up, and the impossibility of ever having been able to keep up, even back in the twentieth century, when everything was really slow and records cost money.

The purpose of culture is actually social bonding — like you thought all those bad genres you’re not into were — and aesthetics to our level of obsession is just a nice extra along for the ride, and fodder for social signaling (which is why governments spend money on art funding). Culture is everything humans do to interact, and having it go through record companies is actually a completely weird state of affairs.

The problem then is not genius works, but finding, and making, them in your chosen aesthetic vocabulary (the one fixed in a couple of years of your adolescence).

If you’re thinking about money, you’re a small business. You poor bastard.

Economically, the 20th century was just a weird time: where it was possible to mass-produce recordings, but it was difficult and expensive; so we had a record company oligopoly, which is great for squeezing out cash. Now it’s not. Marginal cost approaches zero, and it’s marginal cost, not setup cost, that determines prices. So the price will tend to zero. Microeconomics is a bastard.

In most small businesses, pricing is a percentage whacked onto the marginal cost, and the setup cost is paid for in the percentage. Your setup costs are S (recording, designing the packaging, etc.). You can’t charge the customer upfront for those so you need to whack a percentage margin onto your marginal costs. This is the cost of each additional unit after the setup costs (pressing one more record, shipping one record, etc.), which are M per unit. So your total cost is S plus (M times units), and your return is (M plus percentage) times units.

(I was actually surprised iTunes works at all, ever, for anyone — people paying $1 for something of zero marginal cost. Every sale is made because the people wanted to pay for the unit in question. Convenience is worth more than I’d thought.)

The market is not perfectly efficient. But the new degree of efficiency is quite horrifying and unexpected to musicians who started out in the gatekeeper oligopoly, and it’s not going to get less efficient.

Literally everyone is a musician if they want to be. Good for culture, bad for employment.

The serious problem for the working musician, though, isn’t records being cheap — it’s competition from other musicians. Because any talentless hack is now a musician. There are bands who would have trouble playing a police siren in tune, who download a cracked copy of Cubase — you know how much musicians pirate their software, VSTs and sample packs, right? — and tap in every note. There are people like me who do this. A two-hundred-quid laptop with LMMS and I suddenly have better studio equipment than I could have hired for $100/hour thirty years ago. You can do better with a proper engineer in a proper studio, but you don’t have to. And whenever quality competes with convenience, convenience wins every time.

You can protest that your music is a finely-prepared steak cooked by sheer genius, and be quite correct in this, and you have trouble paying for your kitchen, your restaurant, your cow. But everyone else is giving away zero-marginal-cost digital steaks, even if they’re actually reconstituted tofu or maybe poop.

This means art becomes entirely a folk enterprise: the sound of the culture talking amongst itself. This is lovely in its way, but all a bit fucked if you aspire to higher quality in your subcultural group.

We’re not going to run out of music, but it’s going to be a bit mediocre by and by.

(Music journalism might become a profession again. I thought it had been safely killed.)

No, I don’t have a quick answer.

Musicians are in competition with every other musician in the world, including literally everyone who wants to be a musician and doesn’t have to do it for money. All of whom have access now to the same outlets and channels the other musicians do. We have the technology; it’s cheap. The amateurs are frequently good enough for the public. The professionals sell fuck-all these days.

For live musicians, you’re in economic competition with every other thing in the world that isn’t going out to see a band — like, ooh, the entire Internet — and you know the pubs know it.

A few established bands have managed to record albums through Kickstarter-style pledge arrangements: charging directly on the setup cost, not the marginal cost. You do need to have a fanbase to leverage first.

The obvious answer is the destruction of neoliberalism, of bullshit jobs and indeed of the capitalist system in general, and a world where we don’t have to fight in a rat race for scraps from the owners’ tables rather than make music, but that might be a bit complicated to fully outline a viable plan for in a music blog.

Suggestions are welcomed. (I’ll note that “everyone just needs to change their attitude” is unlikely to work in practice.) In the meantime, go buy something from your old favourites, they almost certainly need the cash.

(By the way, this is a problem I personally have: the loved one just quit her job to do art full-time. Here in the future, selling art for money that we seriously need is proving interesting. GO BUY A T-SHIRT. We’re all supposed to live off T-shirts now, right?)

73 thoughts on “Culture is not about aesthetics. Punk rock is now enforced by law.”