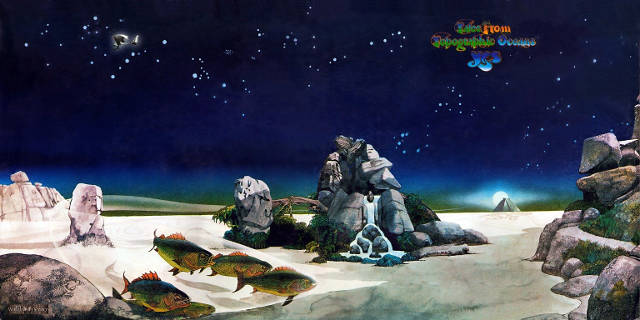 Formed in 1968, “Yes” is fairly much the iconic example of the crossover point of progressive and art rock. Whilst the line-up has seen many changes of the decades, with brief splits and reconstitutions, they’ve produced an epic 21 studio albums, 10 live albums, 32 compilation albums, 34 singles and 19 videos. With a total of at least thirty million album sales, two of the albums made their way to UK number one, and one of their singles did so as well in the US.

With a journey of that length, there is more than a few tales to tell. The following is but a small selection of oddities as a potted history in the “Yes” story, some of which are well known to aficionados, but nevertheless will give all a taste of the flights of these starship troopers. 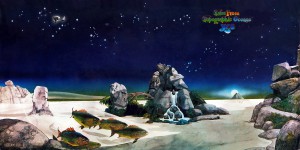 In a recent article in ‘Team Rock’, founding bassist Chris Squire reveals the origins of the band. As a 19 year-old he would visit a club called UFO where Pink Floyd played. Sampling a friend’s home-made LSD, Squire ended up in hospital, telling the inevitable police interview (whilst still tripping) that he’d received it from a random stranger. For months afterwards he found himself barely able to go outside. So instead he practised bass guitar. Eventually he found his way to join The Syn and within the end of the year went with ex-guitarist Peter Banks to form Yes.

2. Music First, Lyrics Last, Meaning If You Can Get It

In a Hemel Hempstead interview of March 10, 1971, Jon Anderson claims an unusual writing style for “Yes”; they start with the music, then find the lyrics to fit it, and if finally, it’s reviewed to see if there’s any meaning. If so, then that’s good, others might discover it as well. Goes a long way to explain lines like “The time between the notes relates the color to the scene”. There are unwashed people in ratty clothes who stumble the streets mumbling to themselves who have been wondering about the secret meaning to that one since 1972.

3. No Really, It Was About Dharma?

In the 1996 book, ‘Yesstories: Yes In Their Own Words’ by Tim Morse, Jon Anderson notes the song ‘Close to the Edge’ was heavily influenced by a reading of Herman Hesse’s Buddhist-themed novel ‘Siddhartha’. This announcement of course surprised absolutely no-one familiar with both, given the fairly clear references of cyclical seasonal change, finding oneself at the river, all of which go to the same ocean, etc.

Following on the theme the next studio album, ‘Tales from Topographic Oceans’, was a double LP of four tracks based on the description by Paramahansa Yogananda that Hindu texts consisted of four classes. With a change in the British Phonograph Industry’s regulations, the album became the first to qualify for Gold based on presales alone. Dividing critics and fans alike with moments of genius among its pondering journey, it would top the UK album chart for two weeks.

As an additional item, a pre-release tape was sent to be played on Radio Luxembourg with David Jensen, but a blank was sent instead. Punk band Crass unexpectedly covered this on their first track of their 1978 debut album ‘The Feeding of the 5000’ with ‘The Sound of Free Speech’. OK, maybe that wasn’t intentional either.

5. Smashed Tomatoes on the Tor

Their ninth studio album in 1978 was originally going to be titled ‘Yes Tor’, the name of a high point in Devon. However the photographs taken for the album cover were considered so unimpressive, that Rick Wakeman threw a tomato at them, especially appropriate given that there is a British Army firing range in proximity. The improved cover was kept, and the title change to Tormato.

6. Records Made To Be Broken

Yes members have a couple of laurels worthy of note. Guitarist Steve Howe was voted “Best Overall Guitarist” in Guitar Player magazine for an extraordinary five years in succession (1977-81) and in 1981 was the first rock guitarist inducted into the Guitar Player Hall of Fame. For his own part, Geoff Downes has been in the Guinness Book of Records for performing with the most keyboards on stage in one single performance, with a record twenty-eight. He still has only two hands, you know.

7. “The Buggles” and “Yes” Form A Supergroup

Following the poor reception to ‘Tormato’, vocalist Jon Anderson and keyboardist Rick Wakeman left the band. Whilst the remaining members of the band continued work, in an adjacent studio new wave producers and performers, The Buggles (Trevor Horn, Geoff Downes) were working next door. It turned out that The Buggles were Yes fans, and Chris Squire was a fan of the The Buggles’s album, ‘Age Of Plastic’, which included the hit Video Killed The Radio Star. As a result of the meeting, the two bands became one for the release and tour for the album ‘Drama’.

For the next album, Anderson returned along with original keyboardist Tony Kaye who had left in 1971. Trevor Horn moved to production, cementing the influence of New Wave into the band, and began preparation for a new album, under the new band name ‘Cinema’. However marketing advice suggested keeping the old name.

When it came to choosing an album name, they took an easy way out – using the Atco Records catalogue number. Certainly made data entry for the massive sales it generated a lot easier. Further notable quirks from the album include the fact that the No 1 hit single, “Owner Of A Lonely Heart”, which sold three million copies in the U.S. alone, was turned down by Arista because it was “too strange”, and the shortest track on the album “Cinema”, just over two minutes in length, was originally twenty minutes long.

In 1989 Yes former members Jon Anderson, Bill Bruford, Rick Wakeman, and Steve Howe formed a band based on their surnames. Anderson wanted the band to be a Yes reunion but the name co-owned by Anderson, Alan White and Chris Squire, and the latter two were still working with Trevor Rabin and Tony Kaye as Yes. For a brief period the band was called The Affirmative. When Anderson Bruford Wakeman Howe toured, they titled their shows “An Evening of Yes Music Plus”, however they were sued by Yes, leading to the interesting situation where the co-owner of a name was suing himself for its misuse. The two resolved their differences and produced the thirteenth Yes album imaginatively titled ‘Union’, which combined not only the line-up of both into a nine-member band, but also material intended for two separate albums.

2 thoughts on “Yours Is No Disgrace: A Small Selection Of ‘Yes’ Trivia”