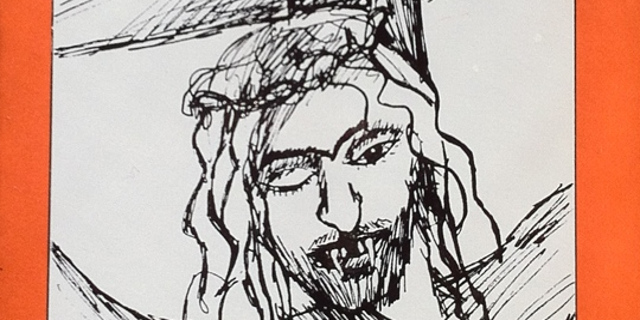 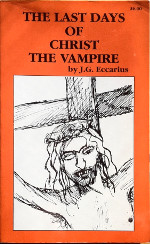 If you’re going to suffer unresolved literary trauma, you should get it from a title like that, which you will be unsurprised to hear is far and away the best thing about the book.

This is a terrible, mediocre, not very good, yes-but-why-are-you-telling-me-all-of-this lump of ’80s edgelordery. I read it courtesy the old girlfriend who collected every vampire novel she could get her hands on. She correctly described it as one of the worst things she had ever read, in a tone that suggested it had given her cause to regret the collector’s urge.

If I recall correctly, much of the action is arguments between anarchists and Stalinists. Eventually SPOILERS the protagonist finds Jesus Christ Himself alive in a sub-basement of the Pentagon, sustaining the whole edifice of imperialist capitalism by the power of magic. I might be misremembering, this was fifteen or sixteen years ago, but I never plan to go back and check.

Here’s a sample. The best-written and most human and believable depiction in the book is of the ideological leftist infighting.

The author was one of the contributors to Factsheet Five in its last year of steady operation. I am reminded that I also read one of his other terrible novels, We Should Have Killed the King, another anarchist tract with a thin veneer of fictionalisation. This shouldn’t have sucked, but nobody told the guy to stick to nonfiction.

The publisher is III Publishing, purveyors of relentlessly incompetent anarchist fiction, a veritable firehose of Ayn Rand level didacticism but from tedious anarchist essayists. All set in the same Times New Roman with straight quotes, you could recognise any III book immediately. Everything they published was about this bad.

They put out at least one other anarchist vampire novel, Virgintooth by Mark Ivanhoe, which I have thankfully evaded this lifetime. But I guess “paranormal anarchism” is a genre now.