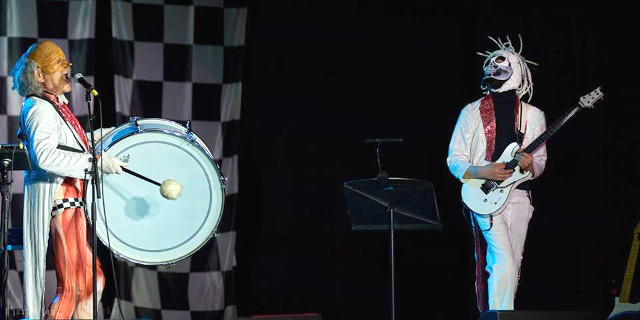 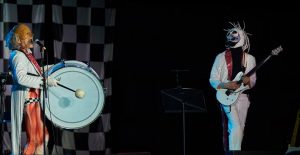 Certain bands make an initial mark on the world with icons. Whether it’s as simple as the Dead Kennedy’s logo, or as offbeat as Devo’s energy domes and radiation suits. But few are as memorable as The Resident’s eyeball helmets, reminiscent of Hugo Ball, or perhaps as once suggested, inspiration for Einstürzende Neubauten’s logo. At least with The Residents the theatrical presentation is part of an overall surreal and experimental ensemble, that has been operating for since the mid-1970s.

As part of their global “Shadowland” tour, The Residents performed at The Croxton bandroom in March 2016 (indicating how long this has been sitting in my ‘to do’ list), a somewhat underrated Melbourne suburban venue. The tour itself was the final part of a musical trilogy, which started in 2010 with the “Talking Light” tour and then was followed in 2013 with the “Wonder of the Weird” tour. As explained in the concern, the first tour was about ghosts and death, the second about love and sex, and Shadowland is about birth and rebirth – “life in reverse!”

The support act, Sky Needle, were competent and appropriate to the theme of the night with some haunting vocals, although it was clearly The Residents’ show. They come out with flourish dressed in as style reminiscent of ‘Beetlejuice’ and wearing devil-masks, with the short and powerful ‘Rabbit Habit’ “I love the rabbits and I know the rabbits love me”. It could have been the inspired theme song of a certain company director (no we haven’t forgotten you, monster).

It was quite a long concert, with a set of three to four songs, punctuated by short movies, making up well over twenty tracks in total. Their music, loosely defined, tends towards the abrasive and the disruptive with often deliberately broken melodies and structure, with an overall country-gothic darkwave feel. Of the musical content, the despair of ‘Herman the Human Mole’ and the destiny inspiration of ‘Judas Saves’ being particularly memorable. Overall however it must be mentioned that there is not enormous variation in their generaly droning music style which can easily tire. Several experimental and scouring songs can generate interest if one has a taste for the exotic; after three times that number one can be numbed.

The short movies however were especially insightful contributions. ‘The Libertine’, with its background electronica presented itself like a strange science short story, creepy and disconcerting, whereas ‘The Garbage Man’ story, with the realisation that practical workers are more respected than high-paying white-collar executives was particularly insightful and ‘The Model’s Mother’ being a tragically sad story which combines rebirth and pettiness.

It must be said as a multimedia event with visually and acoustically challenging material the concert, already quite long, felt even longer than the time would indicate. It was in many ways a mental endurance test, and in that regard it must be noted the The Residents are better in term of stage performance and video than they are in musical expression. Given that it was music that made up most of the show it was perhaps not as enjoyable as it could have been and one cannot help but think that more film and less music would have improved things greatly.