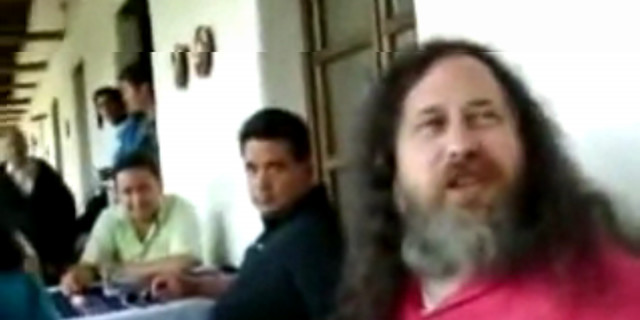 The above crawling horror is a classic of the software development field. You may not like that, but it’s true.

Richard Stallman would be a crank except he’s basically been right about everything for the past thirty years. (And the world will never forgive him for this.) He started the Free Software Foundation in 1985, because he thought all computer programs should be improvable by their users, because of course everyone is a programmer. That bit didn’t really work out, but he did introduce the idea of “copyleft,” a formalised version of share-and-share-alike enforced by copyright law. This doesn’t work tremendously well in music, but you can see the success of it in things like Wikipedia, Firefox, and his GNU project, which combined with the Linux kernel to take over most computers in the world that aren’t your office PC, including half the phones.

So he ended up writing a song about this great concept!

I wrote the free software song at a filksinging session at a science fiction convention, probably in early 1991. It was a “bardic circle” session, which means each person in turn around the hall had the chance to either sing or ask someone else to sing. I had just had my turn, and there were 20 or more people there, so I knew it would be a long time before I had another turn. I decided to pass the time writing a filksong. This meant I was not starting with any particular inspiration in mind. I had to look for what to write about and how.

So first I asked myself, what topic should it be about? I realized I had never written a filksong relating to free software, so I figured it was time I did.

The above is actually a better recording, preserving the 7/8 timing. Here‘s the potato-quality original.

In 2001, Matt Loper did a techno remix. It’s actually surprisingly good, doing a lot in its four and a half minutes. I played this in a goth club in 2001. Admittedly the Wednesday evening after-work drinks thing at Mega Bar, but still:

And! I found a version of the original Bulgarian folk song, “Sadi Moma,” that it was based on! Listen to Stallman then listen to this. The proper thing is actually musical and stuff. Try this take: