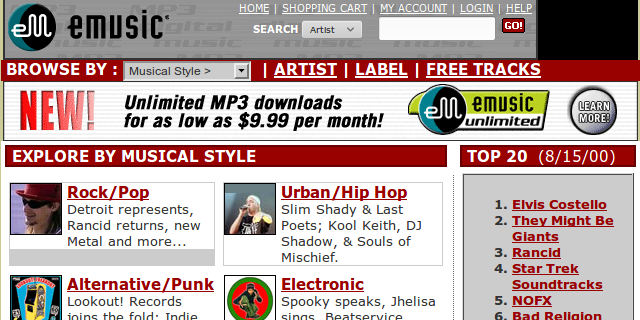 It looks like eMusic’s attempt at a comeback last year didn’t work out so well. Behold: the eMusic Blockchain Platform! “The First Major Music Service to Embrace Blockchain Technology.”

This is what people who follow the disaster that is blockchain (like me — check out my book!) call “having a Kodak moment.” That is, a comprehensively fucked company desperately casting about for buzzwords that might save them, as the tattered and flayed hide of what was once Kodak tried in January.

(SPOILER: the buzzwords totally won’t save them.)

The site is token.emusic.com, which suggests they’re working up to an ICO — an event in which you give them money for magical Internet pogs that may be worth something some time hypothetically, and maybe everyone involved won’t go to jail … though the Securities and Exchange Commission is finally getting around to arresting people for this nonsense.

Every ICO has a “white paper,” which would be called a “prospectus” if they were doing a proper securities offering and not just cargo-culting the form of one. eMusic, embracing their fucked company status, have emulated Kodak and called theirs a “light paper.”

This is a woeful frickin’ document.

I’ve written at length previously about how your standard music industry chancer has now decided “blockchain” is the buzzword of choice, even though this trash can’t possibly scale and makes no technical sense to pursue. eMusic’s approach to this dilemma is a complete absence of detail.

eMusic keep to the form admirably.

Pages 1 to 5 detail the problem with streaming — the artists and the streaming companies are getting bugger-all, and “major labels and their publishing partners have fought to maintain heavy financial control over the industry and the squeeze is felt on both ends of the supply chain.” If you wanted to solve the problem that it’s actually the labels taking all the artists’ money, and blaming the streaming services, then messing about with blockchains is approximately the least effective thing you could do.

On page 6, eMusic’s problem comes out: “eMusic is at a crossroads. Do we stay the course and focus on a shrinking digital downloads market? Do we enter into losing streaming agreements that conflict with the company’s ethos of championing the indie artist?”

Quite a dilemma, and remember that eMusic has gone broke repeatedly over the past twenty years. But no doubt they’ve got a solid business plan this time!

… no, they’re wishing for magical flying unicorn ponies: “eMusic is embracing Blockchain and its ability to correct an imbalanced industry.”

Make no mistake — this is like someone with cancer saying they’ll convert to Breatharianism and see how that works out.

At this point you’d expect them to outline their plan. Pages 7 and 8 promise a magical music industry of fruit and flowers for everyone! Here’s a diagram to answer all your questions: 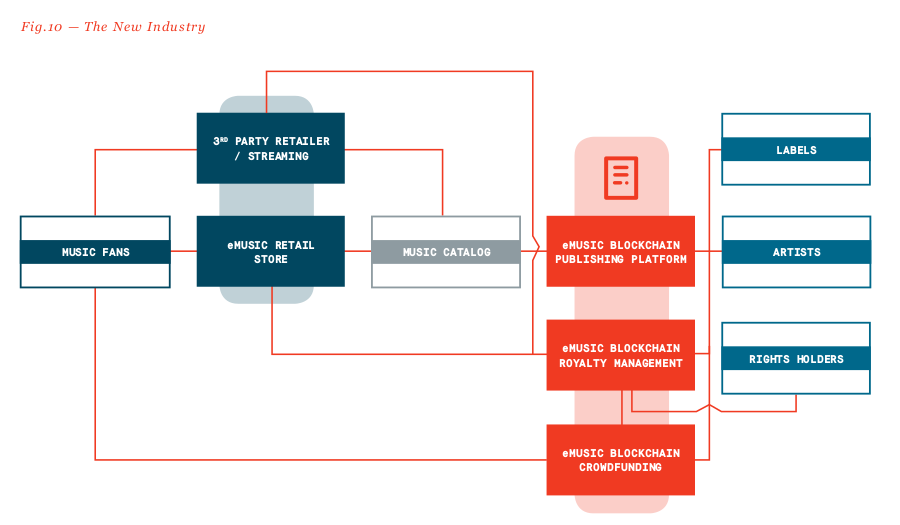 If you looked at that and thought the red boxes really said “Fucking Magic™,” you’re quite correct.

Page 10 promises more blockchain-enhanced fruit and flowers for all, and there’s another diagram, whose title is “Smart Contracts Do All the Work”: 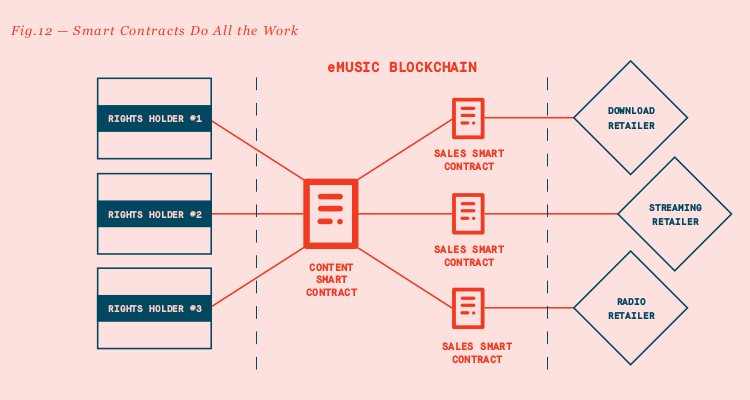 The key to understanding this diagram is that “Smart Contract” is another word for “computer program.” That’s all. So what they’re saying is: “How will we revolutionise everything? With … computers!!” um, OK.

Page 11: “There are a number of Blockchain music projects being considered, but they are inherently flawed.” eMusic’s project avoids flaws by having no substance to have flaws in.

Page 13 finally says what the hell it is they’re actually doing: “eMusic will introduce a brand new Blockchain-based crowdfunding platform that allows fans to support their favorite artists in return for limited rights to music.”

This appears to be a variant on PeerTracks’ scheme — you pay an artist upfront, supplying their advance, and this gives you a percentage of the take as return on your investment, if and when the record sells or gets streamed. It’s 2018, so there’s any number of blockchain projects making this sort of pitch.

(I’m pretty sure eMusic’s thing has nothing to do with PeerTracks as such — it’s a pretty common “music on the blockchain” pitch of late — but I’ll note in passing that, per Rocknerd passim, PeerTracks was launching end of 2015 you betcha. Currently the site [archive] talks about “COMING SPRING 2018.”)

At the end, we have the standard circular black and white portrait photos of The Team. I think none of these people have been around eMusic very long — they’re from the most recent company to buy it out. There’s very little music experience, and there’s a single blockchain guy. The list of advisors misspells “formerly” as “formally.”

The other standard element of the ICO form is a blog post on Medium, sharing your reasoning behind the decision. eMusic has one too — though not signed by a person, just by “eMusic.”

The post contains no detail — just a description of the magical things that could happen if the most hypothetical blockchain dreams were true, because smart contracts are magical. I have a post over on the blockchain blog covering how this sort of thing works:

This company is so utterly, utterly fucked.

HT Heidi Weispfenning for the tip