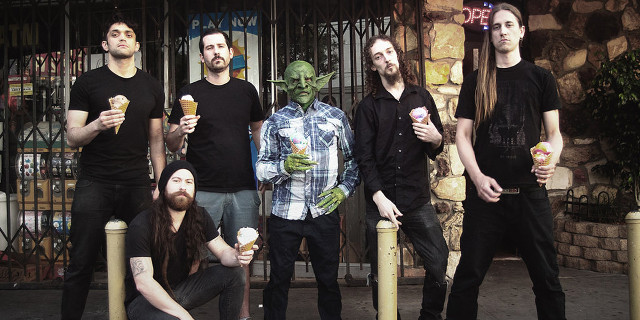 A lot of metal is full of goofy bullshit, a lot of which is very somberly growling about Satan, hell, torture, shit, darkness, and other suitably grimy and nasty metal things. And sometimes it turns out that goofy bullshit is pure, distilled perfection and the concentrated essence of joy.

Nekrogoblikon is the kind of glorious, sugary, simmering bullshit that rises to the top and becomes the cream of the crop of the screamers and growlers filling the metal market. Their music is a joyful, nearly worshipful, celebration of bears, things that smell really bad, how much the moon sucks, and lots and lots of goblins.

And I love them.

If you don’t like goblins or gimmicks or GWAR, turn back now because that’s all I’m going to be talking about for the next 500 words.

I’ll start with GWAR. If you don’t know who GWAR are they’re the scumdogs of the universe, a novelty gross-out metal band who wear huge ridiculous monster costumes onstage and spray their audience with fake blood and piss. They’re loud and they’re fun and they’re goofy bullshit. Do you see where I’m going?

Nekrogoblikon took the stage persona gimmick in a different direction, employing goblin hypeman John Goblikon to star in their videos and get fans to utterly lose their shit at shows. The geeky, sad-sack, office-drone goblin was the central character in the band’s 2012 video for “No One Survives” (above), and the portrait of a pathetic cube-dweller rising up to disembowel a jackass middle manager to a soundtrack of melodic death metal catapulted the band to slightly less overwhelming obscurity.

Are you with me? Gimmicky, gory stage personas are a proud tradition in metal and Nekrogoblikon has updated that tradition (while also lampshading that tradition – see their song “We Need a Gimmick”.) They make loud fun music and have a strong aesthetic that they reinforce with colorful, violent, surreal music videos. Still with me? 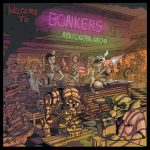 Cool, they have a new album out as of April 13th. It’s called Welcome to Bonkers and it’s great.

In spite of the fact that a lot of their music is extremely silly, Nekrogoblikon is still a really heavy band and that comes through in much of the album; “The Skin Thief” is full of the kind of overwhelming drums and throat-shredding growls typical to black metal, as is “Row”; “The Many Faces of Dr. Hubert Malbec” has a lot of the same but that’s where shit starts to get weird. There’s still lots of growling, still lots of fun metal soloing, but the guitar starts dueling with a manic organs and we take a brief diversion into show-tunes. “Darkness” is a big, fun, dopey tune with strong eighties vibes mid-song; it might be my favorite track on the album but it doesn’t quite sound like the rest of the album – Nicky Calonne’s voice is clear and ringing for more of the track than is typical and it shifts the song rapidly from goblinish growls to thrilling power screams.

Then you get to “The Magic Spider” and you’re listening to an alternate dimension version of Katrina and the Waves. The sudden clean piano and peppy, up-beat, major key melodies and initial cheery vocal line smack into you more than the screams and solos of the rest of the album. Nekrogoblikon melts your brain with sugary pop candy because it comes out of nowhere and romances your poor confused ears right until the throbbing drums kick back in and they continue to shred your face with metal. The track ends with steel drums because of course it fucking does.

Welcome to Bonkers as a whole is a wonderfully fun album to kick off your summer listening season, it displays all of the exhaustive skill and musicality required for a death metal record with none of the dour sensibilities. If you’re at all into metal, prog, or just bands with a sense of humor you should give it a listen.

Oh and the single “Dressed as Goblins” has a pretty great video that you should check out (below).