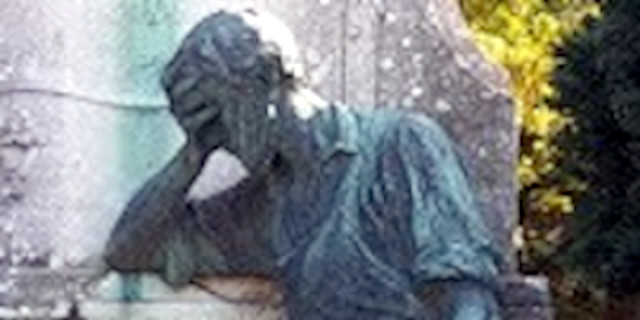 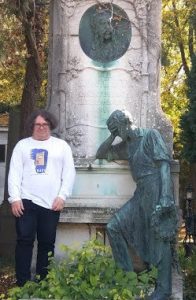 In the early 90s I was introduced to the notion of “art damage”, appearing as an editorial rant in the glorious glossy cyberpunk magazine, Mondo 2000, now sadly forgotten by most. Incorrectly, of course, it claimed “Part sampling, part burlesque, Art Damage could not exist until now”. Of course it could and did exist, and the reference to sampling and burlesque is evidence of prior art. A rather trivial but amusing comparison list was made between “good” and “bad” art damage, much of which was so tritely culturally specific in place and time to lose any lasting meaning at all. Does anyone know why the Logitech Baby Ad would be considered “good art damage” and why the Benneton Baby Ad was “bad art damage”. Of a generation, I remember both ads; the Logitech one was amusing, the Benneton one was too natural for sensitive American tastes – even though every person who objected to it had been there. There was also the more agreeable “Not Art Damage”, “people who wouldn’t recognize ironic distance at two feet”. Avoiding the moral claims of “good” and “bad”, perhaps it is best to have two continuum from “beautiful” to “ugly” in accord to the pragmatics of aesthetics (recognising that representing the ugly side of life has value and insight) and subjective experiences, and “art damage” to “not art damage” in terms of impact and significance. David Bowie was included in both, and the Tin Machine as “not”.

It was around the same time that I increasingly came to realise that self-referentiality was extremely important into aesthetic products, and well beyond subculture or genre. By this what is meant is the composition includes references to the process of its own composition, thus providing a grounded story accessible to hermeneutic analysis, but also with references to similar products to provide for the continuance of tradition in an aesthetic endeavour. If you really want to dig deep into a great work of literature, for example, get yourself an annotated version with footnotes (ahh, how high-school and undergraduate literature students would swear by York notes) and additional critical essays that will hopefully illustrate in wonderful detail how the work situates itself in the overall literary tradition with the author illustrating that yes, they don’t just write, but they also love the story of writing. The Annotated version of Nabokov’s Lolita is a well-known and easily available example. Longfellow’s translation of Dante’s Divine Comedy is another.

On the idea of art damage through self-referentiality, special initial mention must go to the band Fear Before the March of Flames who released an album in 2004 entitled “Art Damage”. It’s a rather interesting item, combining aspects of typical hardcore fusion of punk and metal, but mixed with the sort of elements normally found in math rock. It gets bonus recognition for having the sense of taste to write a song about serial killing and filming the video clip in the same basement used in the film Fight Club. It’s a very long way from my taste in music, but I can appreciate it for what it is, especially the work of drummer Brandon Proff. Much more to my taste is the work of Canadian musician Matthew Claener who produces material under the name Art Damage, with three thoroughly enjoyable ambient electronica-industrial albums, Disabled Controls, Space Magic, and There Are Rules To Every Exception. Indeed, it is from that genre and related material that there is extensive use of self-referential art damage in the form of sampling of relevant works; the album Rabies by Skinny Puppy, for example, makes use of Charles Manson, A Clockwork Orange, Hellraiser, and Scanners combining well with the content matter and their style of music. DJ Shadow makes extensive use of sampled material that suits their style, with Endtroducing….. making the Guinness World Records book for “First Completely Sampled Album” in 2001, the instrumental trip-hop album providing a narrative of sound selections into a coherent whole; beautiful art damage.

As suggested, the mere act of sampling in music however does not make for art damage. Self-referential art must illustrate coherence, a contribution to the narrative. When the Sisters of Mercy performed the industrial lyrics of Lucretia, My Reflection in an industrial landscape they understood this need. Note-perfect covers do not help, even if it may be competent, maybe even selling more than the original; do we really need another version of Mbube (Wimoweh/The Lion Sleeps Tonight) that makes no further contribution to what already exists? As beautiful music goes, does Beyoncé contribute anything innovative to Schubert’s Ave Maria? At least Bauhaus’ version of Ziggy Stardust was different and yet also provided strong association to the original, as does Ella Fitzgerald jazz piece My Rêverie from Claude Debussy’s Rêverie, to give a highly divergent example. Is Barry Manilow’s use of largo chords from Chopin’s Preldue in C Minor in the pop song Could It Be Magic a contribution to the theme or an irrelevant appropriation?

Many examples can be provided, and it must be said it is not just musicians themselves who can contribute to self-referentiality and art damage. Fans of music can also provide, even if it is from the great West Australian bogan ritual of pouring a bottle of booze on grave site of AC/DC’s Bon Scott at Fremantle Cemetery or similar visits to Jim Morrison’s grave at Père Lachaise Cemetery, in Paris, even these actions really rank as “not art damage” themselves, although some do become so even by accident – such as Brett Meisner photograph as Morrison’s grave. Some even turn the activity into a profession, witnessed by the endless parade of Elvis impersonators which, as a profession, must surely also rank as “not art damage” regardless of the competence of the performer. It is with such fannish activities in that your author, travelling across the globe from Melbourne, Australia to Vienna to the Zentralfriedhof in Vienna. The Viennese central cemetery, famous for its interment of musicians and psychoanalysts is accurately described as Halb so groß wie Zürich – aber doppelt so lustig ist der Wiener Zentralfriedhof! “Half the size of Zurich but twice the fun is the Vienna central cemetery”. This location includes the grave of Carl Schweighofer, appropriately a piano manufacturer, whose grave featured on the cover of Ultravox’s Vienna. Art damage (if not very significant) is attending such local in a Ultravox t-shirt, even if the sloppy grin makes the statue seem to be saddened by the worst “dad” joke.

Curiously, even Rocknerd itself is not free from self-referential art damage. Years following its story on the conspiracy of how Theodor Adorno and the Frankfurt School wrote all The Beatles’ songs in a Freudian-Marxist plot to undermine Western society, some wag printed out said article and posted them in the middle of the night on the front entrance of the Frankfurt Institute for Social Research. Who would do such a thing? Whoever they were, they have showing a sense of how to carry out self-referential art damage. 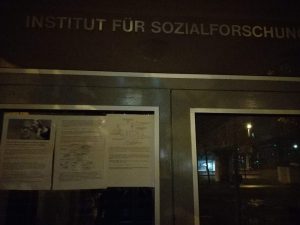