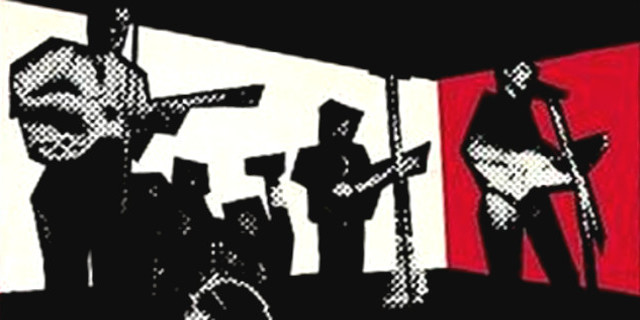 Clinton Walker’s classic book on Australian post-punk indie rock, Inner City Sound, came out in 1982 and has been unavailable on the face of the earth for most of the years since.

However, some enterprising preserver of culture has recently seen fit to make available a bound photocopy of the entire book.

Inner City Sound stemmed from the fanzine Pulp done by Walker and Bruce Milne in the late seventies. The book was a digest of the first four issues and material from the never-released fifth issue, plus articles from other places such as Roadrunner (an Adelaide semi-pro fanzine which ran from 1978 to 1982).

The book covers the first burst of Australian indie bands of the time, the bands coming before the explosion in Australian indie rock of the mid- to late-eighties. It’s well-written and covers its field brilliantly.

The photocopied bootleg is of quite usable quality. The original book was all black and white with a decent font, so the photocopy is quite readable and the photos don’t suffer terminally.

I’m amazed that a book this valuable and informative is so hard to find any trace of. As you can guess, I consider it an essential educational tool for all, and a powerful weapon in fighting back the aggressive ahistoricality of the popular culture machine. Get a copy. Memorise it. Treasure it.

Where can you get your copy of the bootleg? … On that, I couldn’t possibly comment.

* Clinton Walker’s second book on the subject, Stranded: The Secret History of Australian Independent Music, 1977-1991 (Macmillan, 1996 – ISBN 0-732-90883-3) – “‘Stranded’ is the story of the marginalisation of the music movement – and its eventual victory. Clinton Walker published Australia’s first punk fanzine in 1977 and, as the country’s leading music critic in the ’80s, chronicled the independent scene.”

* Wants, Trades and Australian Music Info from innercitysound.com.au (which, despite the name, is not actually linked to Clinton Walker or the book itself) – websites and books to read and record shops to frequent.

One thought on “‘Inner City Sound’ by Clinton Walker (sort of) in print again.”