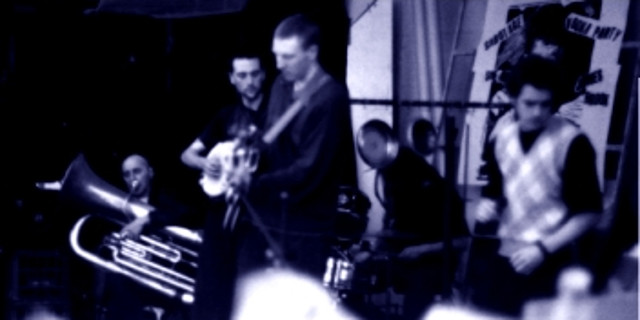 Bird Blobs: Ian Wadley is the greatest guitarist in rock. Vodka Party: have a tuba. A good night surrounded by unfamiliar attractive people.

Vodka Party are from Tasmania and feature Alex from Sea Scouts on vocals and a bunch of people who look like pirates on double bass, tuba, piano accordion etc. They sound quite a bit like Rain Dogs era Tom Waits (specifically, the song “Singapore”). I really liked them, especially because they caused the Empress to be full of Tasmanians who don’t look like they’re conspicuously trying to be Indie.

Ian Wadley is the greatest guitarist in rock and I want everyone to know that. Bird Blobs is Ian, Tim from Sea Scouts, etc., Tom (?) from Dworzec etc. and a guy on bass that I didn’t recognise but would if I ever went to see bands. If you like Dworzec then Bird Blobs are kind of similar, in that both bands sound a bit like the soundtrack to a black and white noir film playing on the ABC at 2am.