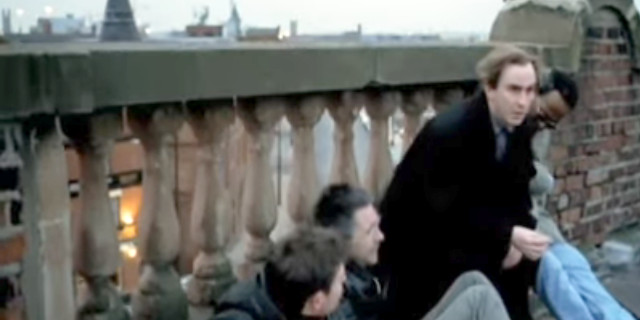 Factory Records and its bands occupied thirty to forty percent of my brain between the ages of sixteen and eighteen. I had the most appalling collection of Joy Division and New Order bootlegs. (To the point where the record shop guy granted me access to the box of UK bootleg cassettes under the counter, knowing how far gone an addict I was.) I didn’t get to the stage of dreaming of having my own FAC number, but it was damn close.

24 Hour Party People was a religious experience for me. Wonderfully realised and very amusing.

This is the film that spawned the book by Tony Wilson of Factory. (A biography inspiring an autobiography.) Although it by no means claims accuracy (e.g., one minor character having been created out of thin air purely for story purposes). It’s cute seeing Howard Devoto pop up after one incident and say “I really don’t remember this happening, you know.” But, as the Tony Wilson character says, “Between legend and truth, always choose the legend.” Particularly in rock’n’roll history. The distortions and occasional outright lie support its status as the filmed version of a backstage bull-session story.

After seeing the famous Sex Pistols show that kickstarted the Manchester punk scene (with forty-two attendees and an incredibly scout-hallish atmosphere), Tony Wilson decides that putting bands on his TV show So It Goes is not enough, and he’s going to start a club called the Factory. Then he signs Joy Division to the new Factory record label, with a contract – written in his own blood – saying that there will be no contracts. Perfect.

Steve Coogan is wonderful as Tony Wilson, playing the self-bullshitting entrepreneur, arthead, artistic midwife and obsessed fanboy to perfection, and showing the tension between Wilson’s TV day job (e.g. human interest stories on an elephant being washed by a midget) and his ambitions to catalyse lasting cultural impact. His haircut changes appropriately through the film too. (And then stops changing.) And Andy Serkis renders the drugfucked genius of sound-recording obsessive Martin Hannett frighteningly well.

The other stars of the film are Joy Division (the actor playing Hooky looks nothing like him, but the one playing Ian Curtis does a frighteningly good job), Happy Mondays and the arty rise and drugsoaked fall of the Haçienda nightclub. The latter having been reconstructed especially for the film. And no, I never did get into that Madchester shite. But damn, they did a good job on it. You could feel the sweat. Almost made me want to be there. Almost.

(Quick Factory trivia quiz question: What was the film Ian Curtis was watching on television the night of his suicide?)

It’s lacking in the early Factory bands. There’s a fair bit of Joy Division and not a lot of New Order (though the latter is portrayed doing an acoustic version of “Blue Monday” which works surprisingly well). Bucketloads of Happy Mondays. A bit of A Certain Ratio, a good impression of the Durutti Column (Tony Wilson was always Vini Reilly’s greatest fan). Could have done with at least a passing mention of the second-string bands – Section 25, Crispy Ambulance and so on. And Factory Benelux and Factory US.

It really helps to know a bit of the history, but there should be enough for those who don’t know it to get the story and idea. Nevertheless, you lot have a towering interest in culture and need this film as a vital part of your musical miseducation. I’m not sure about its interest level for people who aren’t crusty old post-punk rocknerds – its commercial success will be entirely a function of how many people there are in the world who are just like me – but they are just wrong if they don’t like it anyway.

It runs 120 minutes and feels like ninety. Smug and irritating – post-punk nostalgia is still nostalgia – but it doesn’t care and neither do I. By halfway through I was trying to work out when I could afford to see it again. And putting it on the mental shopping list for the day I finally fall prey to the cult of the DVD.

After the film, I wandered past Camden Markets. The Doc Martens stall was selling – are you ready for this? – Doc Marten-soled thongs. The jeans shop boasted of stocking all the baggy and flared jeans you could never want. Several people on Chalk Farm Road tried to sell me heroin (which at least is a change from people thinking I’ll sell it to them). But my companion for the film was nineteen and nevertheless heavily into the crusty old post-punk that still occupies thirty to forty percent of my brain, so there’s still hope for the youth of today. And that they don’t need to all be taken out and shot, or sent on National Service and made to listen to vinyl records for a year. Not that that last isn’t a damn good idea anyway.

“It’s a stoner comedy! Compare and contrast with Dude, Where’s My Car?, whose heroes never actually spark up. Tony Wilson, Alan Erasmus and Rob Gretton, meanwhile, are smoking joints in roughly 23.5% of the scenes in 24 Hour Party People. Even moody old Ian Curtis has a smoke. Now, I’ve never thought of Factory, and certainly not pre-Madchester Factory, as a montage of Cheech and Chong’s finer moments. That’s a notion that certainly doesn’t fit with the lovely clean Bauhaus (the institution, not the band) feel the best Peter Saville graphic design has. On the other hand, it does help explain an awful lot of strange decisions. Why did you sign Northside, Tony? ‘Because I got high, because I got high, because I got high…'”

And no, I have no idea when or if the film will be released in Australia. I’d be amazed if it didn’t have at least a passing season there, though.