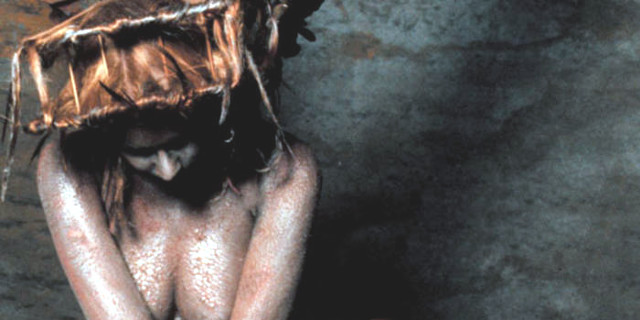 It seems that maybe the muse has been getting around in EBM and Darkwave circles of late, or maybe just the right drugs are being taken … whatever it is, there is some fantastic new music on its way, and here are some short reviews of some of the current and future releases …

A short review won’t really do this one justice, so maybe I’ll write up a separate one later … suffice to say this is probably in the running for electronic release of the year. Full of all sorts of diverse styles – from trance techno to old-skool industrial – and all melded into a hodge-podge that should surely be a mess but instead turns out to be the sonic equivalent of one of those 3D rollercoaster rides that keeps changing from one scene to another – thrilling, breathtaking and nothing short of brilliant. Fantastic mixing and production that we’ve come to expect from Dependent Records artists takes this music into truly ethereal realms, and is best listened to LOUDLY on a high-end system.

Ivory Frequency have only been around a short time, but the amount of hype generated for this release has been phenominal, ever since their “Today” EP a few months ago. That track – included on this CD – was a slamming, noisy, intense dancefloor barrage that never relented, and people were expecting this album to be in similar style. Instead, Ivory Frequency refused to take the easy path of dancefloor monotony and released an album with a number of important themes – noisy, distorted beats and vocals; and extremely high synths – but apart from that there is almost no binding feature between the tracks – many of them skew from high-pitched sonic craziness to ethereal darkwave textures and then to almost simple and beautiful rhythms and back. No two tracks are the same, and every one feels like the artist has put his whole heart and soul into it.

One of the most original releases for quite some time now, this album should cement Ivory Frequency as a force to be reckoned with in the world of dark electronic music. It’s a pity that there are only 8 tracks on this album. It should be released in the next few weeks …

Top tracks – Practically all of them, but in a pinch – “Today” “Clock is Ticking Fast” “See the Light” “The Strangest Callings” and “Beasts & Demons”. Rating: 10/10 – and I don’t give that sort of score lightly. Save your money and get this one.

Yet another track-packed EP release for this trio sees them stick to their slightly-industrial roots and aggressive vocal stylings – and to good effect. The title track is delivered here in extended and single form (essentially the same) as well as an excellent club mix, a surprising yet effective Clan of Xymox remix and the CPR mix by Chris Peterson of FLA/Delerium that is overshadowed by the other versions. Also comes with three B-sides, which are all better than average material. Definitely one for fans of slightly aggressive, more industrial-sounding EBM, a la Funker Vogt and Accessory.

Top tracks – Club mix and Clan of Xymox remix of the title track, “Kaeidoskop”. Rating: 7/10 – Good for both the dancefloor and the home.

ICON OF COIL – THE SOUL IS IN THE SOFTWARE album

Check out my long review for a better description of this release, but thought I’d mention it here too – Icon of Coil’s new album has pushed some of their traditional boundaries – experimeting with different vocal and beat stylings that at times are reminiscent of Covenant’s Europa release. And the album comes off all the better for this, the best songs being those that don’t have a straight dancefloor bent – unfortunately the first single “Access & Amplify” falls into one of the monotonous dancefloor filler categories and might give people the wrong impression of the album (as it did for me). Never fear, however, the funkier and more experimental tracks make this a great release that quite easily stands alongside first album Serenity Is The Devil

Top tracks – “Violations” “In Absence” “Disconnect” “Simulated”. Rating: 7/10 – expect “Simulated” to get stuck in your head after the second listen – very catchy.

DEINE LAKAIEN – WHERE YOU ARE (Remixes) EP

Although their most recent album White Lies was relatively poor fare by Deine Lakaien’s usual standards, this second single from the album has regained some of the twisted majesty of most of their earlier releases. It comes with six mixes of the title track, most of which offer a wide range of perspectives on this beautiful and thoughtful track. The single mix has added some nice staccato beats that provide an interesting counterpoint to the violins and piano work as well as Alexander Veljanov’s deep, majestic voice – it shouldn’t work, but it does.

The club mix is fairly similar but has the staccato beats laid out in a more simplistic, straight-doof pattern and is of course longer. Also included are two very Kraftwerk-esque remixes which don’t really do the song justice – and tend to take away the ethereal harmonies that make new Deine Lakaien work so well. For the dancefloor freaks, a VNV Nation remix is also included which takes the standard VNV Nation this-is-gonna-be-big-in-clubs formula but manages to retain the feel of the original quite well. Overall a good release for both fans and those new to Deine Lakaien’s brand of darkwave melodies.

Diary of Dreams have always to me been one of the bands best at mixing old-skool goth with new synth styles and have strangely been very overlooked in this country – particularly on dancefloors where some of their material would go quite well. At the same time, their music has much more interesting sequences that lift it far above usual dance fodder – this new single from forthcoming album Freak Perfume is no exception – possessed of a strong danceable beat but the same time with the dark, deep vocal stylings and despairing synth lines that have become trademarks for Diary of Dreams. And while this single is not as good as “Nobody Left to Blame” or “Butterfly:Dance”, especially since they seem to have run out of ideas for lyrics, it is still a great release for those looking for a new goth fix. Comes with some interesting remixes of older tracks “Exile”, “Victimized” and their hit “Butterfly:Dance” – which add some interesting, dancey and, in some cases, noisy perspectives on the old songs.

This synthpop group are still yet to make it big within electronic circles, but this new release could certainly change it – It puts you in mind of some of the better electronic-based Britpop released in recent years – and the lead singer has a tremendously sexy voice, which is always a help. A strong beat and some nice synth stylings help give this a sound that I’ve described as “like De/Vision, but more manly” :) Unfortunately, this song also suffers from “we can’t think of any more lyrics” syndrome, but apart from that it’s definitely one of the better synthy releases of the year.

The club mix lacks the vocals and as a result is far less interesting, and the EP also comes with two interesting covers – “Paint it Black” and “You Can’t Get Always Get What You Want” by the Rolling Stones – both are very well executed in completely different ways and the sexy voice far outdoes Mick Jagger. Two more B-sides give this single value but are far overshadowed by the other tracks.

Top Tracks: “Less Than Perfect (single version)” “Paint it Black” “You Can’t Always Get What You Want”. Rating: 8/10 – The chorus of the title track is one of those “get stuck in your head” affairs. And he has a sexy voice (I think I’ve mentioned this enough now).

MESH – LEAVE YOU NOTHING single

The first release from forthcoming album Who Watches Over Me is an absolute corker – I’ve been playing it out at most opportunities as it perfectly combines modern electro synth stylings with rock guitar and emotional lyrics – as a result it shits on most other synthpop releases at the moment as well as so-called “emotional rock” crap like Creed, Stabbing Westward and Incubus. “It’s never enough, it’s only the broken edge of love” – a heartfelt cry to all those who’ve seen relationships steadily deteriorate one slow step at a time – of course it’s very mid-’90s Depeche Mode, but this is a good thing(tm). The single comes with three remixes that do nothing for the song whatsoever and a decent B-side.

Top tracks: The title track, “Let Them Crush Us”. Rating: 6/10 – Get the album, you’ll get the title track anyway along with some fantastic other songs.

I think that’s enough for now – there appear to be even more fantastic releases on the way – new XPQ-21 album, new :wumpscut: single, new Haujobb album and so on, so for now I’m taking a rest before I get writer’s cramp.