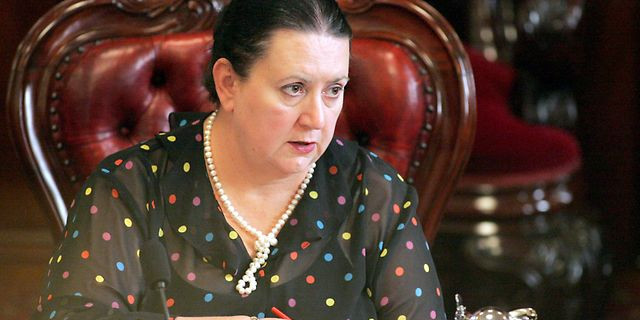 No, really – late on the evening of Wednesday April 10th. You can read the original text on the NSW Parliament site, or from their Hansard search page.

It’s probably a symptom of demographic creep. After all, we’re already getting goth politicians coming through.

Regardless, Rocknerd offers a drink to the Hon. Amanda Fazio. And her little dog too!

RAMONES INDUCTION INTO THE ROCK AND ROLL HALL OF FAME

The Hon. AMANDA FAZIO [10.27 p.m.]: Tonight I wish to speak about the induction of the Ramones into the Rock and Roll Hall of Fame, which has elected the Ramones as its first punk band and the group has taken its place among the musical greats. The group joins other artists such as Tom Petty and the Heartbreakers, Isaac Hayes, Brenda Lee and Gene Pitney, who have been installed in 2002. Artists are eligible to be inducted into the Hall of Fame after at least 25 years have passed since their first record was released. The induction ceremony in Cleveland, Ohio, was held on 18 March, almost a year after the Ramone’s lead singer, Joey Ramone, died of cancer. The Ramones were at the forefront of punk music in the 1970s, but their election has been regarded as a snub to the Sex Pistols, who were nominated but not selected for the accolade. The four members of the Ramones all adopted the same last name and were famous for their fast and furious three-chord thrash. In 1974 the Ramones began more than 20 years of rebellion against corporate rock and influenced the likes of Bruce Springsteen, U2 and Green Day.

It is particularly fitting that the Ramones have been inducted into the Rock and Roll Hall of Fame as it is almost one year since the passing of Joey Ramone, the lead singer of the legendary punk band, who passed away on Sunday 15 April 2001 at the age of 49. The towering frontman, who was born Jeffrey Hyman, had been fighting lymphatic cancer, a disease that attacks the body’s ability to fight infection. Along with his cohorts Johnny, Tommy, and Dee Dee – all of whom adopted Ramone as their surname – Joey was credited with helping found the modern punk movement. Mixing the griminess of the New York streets with a love of bubblegum pop, 1960s girl groups, and the Stooges, the Ramones inspired everyone from the Sex Pistols to Blink-182 to stake their turf on four dirty chords and an often inane hook.

With his trademark rose-coloured shades, black leather jacket, shoulder-length hair, ripped jeans, and alternately snarling and crooning, hiccuping vocals, Joey was the iconic godfather of punk. He gave voice to some of the most revered songs in the punk canon: Blitzkrieg Bop, Gimme Gimme Shock Treatment, Rock & Roll High School, I Wanna Be Sedated and Sheena Is a Punk Rocker. His profile was indelible.

The image of Joey’s body – left foot forward, right foot back, left hand strangling the microphone, fist pumping in the air as he shouted the band’s unofficial mantra, “Gabba Gabba Hey!” – is forever imprinted in the mind of anybody who attended one of the band’s 2,263 shows. It is my eternal regret that I did not attend the Ramones’ first show in Sydney; I have been sorry about that ever since. Joey was born in the Forest Hills section of Queens, New York, on 19 May 1951. He founded the Ramones in 1974 with Johnny, Dee Dee and Tommy. Originally the drummer, Joey switched to vocals two months after the band played its first show in March 1974 at New York’s Performance Studio.

The group soon became a fixture at the dingy New York punk club CBGB, home to downtown bands Talking Heads, the Patti Smith Group and Blondie. In 1975 the Ramones became the first punk act to sign a record contract. Their self-titled debut, recorded for $6,000, was released in 1976 and featured such rock landmarks as Judy is a Punk, Now I Wanna Sniff Some Glue and Beat on the Brat. Destroying the 1970s progressive rock idea that rock had to be played by learned musicians in full command of their instruments, the Ramones pioneered the do-it-yourself ideal that inspired thousands of punk bands with lots of energy but dicey chops to pick up instruments and rock.

The influence of the Ramones on the Australian independent music scene should not be underestimated. Two bands that strongly promoted the ethos and musical trends of the Ramones were the Exploding White Mice from Adelaide, who at the time were regarded as the loudest band to play in Australia, and the Hard-Ons, who came from the suburban area of Sydney around Penshurst and commanded a massive overseas audience when they played on the European concert circuit. The Ramones 1977 album Ramones Leave Home featured a quintessential mix of gutter-punk anthems and homages to classic pop songs, in which Joey sang “I don’t want to be a pinhead no more/I just found a nurse that I could go for,” which was from the unofficial Ramones’ anthem Pinhead. I could say a lot more about the Ramones, because I think it is a most important band and probably one of the most influential of the past 25 years. I was so distressed at the passing of Joey Ramone that I named my dog Joey Ramone in his honour, as I purchased the puppy only a few days after Joey had passed away. I commend members who have not heard Ramones’ songs to listen and learn.

One thought on “NSW Parliamentary tribute to The Ramones: “I named my dog Joey Ramone in his honour.””