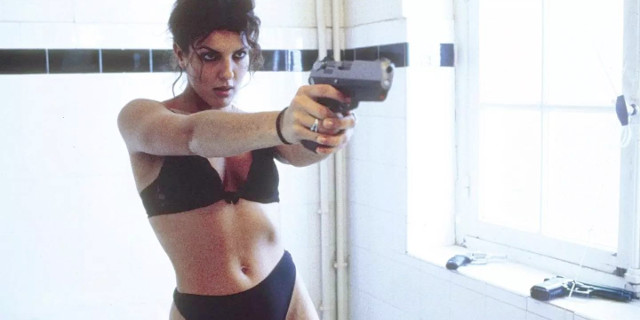 Baise-Moi is a MUFF special. A film that’s little more than an amateurish, adolescent exercise in prurience whose stream of apparently-subversive images masks an utterly uncreative, conventional, conservative nature.

Ultimately, the film comes across as someone’s high-school media-class project. Not only in the amateurish production standards, but in the pathetic waft of teenage rebellion that stinks the film up with a fetid air of futility. Far from being rebellious or revolutionary, Baise Moi is a work only concerned with the pathetic currency of ‘cool’; having neither soul nor something to say; only concerning itself with its own self-generating sense of smugness as it parades images with a believing sense of chic.

With a title whose translation is Fuck Me, Virginie Despentes’ based-on-her-own-book film is a string of tedious exercises in puerile sensibilities, as the film’s two heroines (porn actresses Karen Bach and Raffaella Anderson) have sex, steal, and kill people. It’s z-grade hardcore bullshit, gaining release on the wings of ‘controversy’, and, even more hilariously, earning respect as a profound feminist statement because it subverts the normal male-dominated realm of really-stupid-films-in-which-the-main-characters-kill-people-and-the-audience-is-supposed-to-think-it’s-cool. While the obvious comparisons may be to Thelma & Louise and I Spit On Your Grave, in several moments within the film Baise Moi distances itself from those efforts, and instead tips its hat to two genuinely-confronting works of the late 90s, Gaspar Noé’s I Stand Alone and Michael Haneke’s Funny Games. It’s obviously the belief of Despentes that her film takes the same confrontational ideas as these works –including playing with the artifice of film itself– and strips them of their intellectualist (and, assumedly, male) elitism. But, that said, it’s not hard to see the irony in doing that. By stripping a considered confrontational composition of its intellectualism, you strip it of its intelligence, and, thus the whole reason it is confronting in the first place.Thus, Baise Moi, as anti-intellectual work, only ends up alongside other bastions of anti-intellectualism: right-wing politics, tabloid newspapers, football clubs, multiplex cinemas, and, of course, the sex industry.