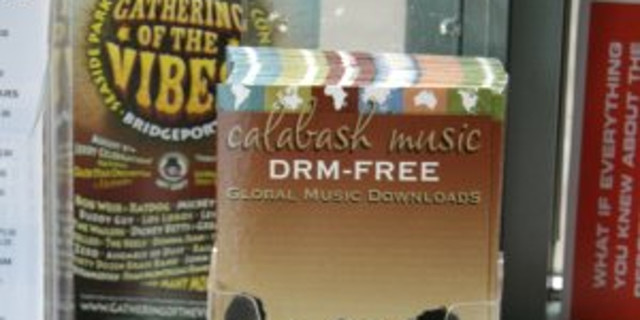 It’s hard to convince someone they’re being sold snake oil if they think their income depends on it:

“I made a list of the 22 ways to sell music, and 20 of them still require DRM,” said David Hughes, who heads up the RIAA’s technology unit, during a panel discussion at the Digital Hollywood conference. “Any form of subscription service or limited play-per-view or advertising offer still requires DRM. So DRM is not dead.”

No doubt NASA say the same thing about why faster-than-light travel isn’t dead. Clap your hands if you believe in DRM! Under whatever name.

Peter Lee from Disney told The Economist in September 2005, “If consumers even know there’s a DRM, what it is, and how it works, we’ve already failed.” So that’ll be failure, then.

And now, a story.

Its voice was so low that at first he could not make out what it said. Then he made it out. It was saying that it thought it could get well again if industry analysts believed in DRM.

Peter flung out his arms. There were no industry analysts there, and it was night time; but he addressed all who might be dreaming of the Fruit and Flowers, and who were therefore nearer to him than you think: boys and girls with straws up their noses, and naked office runners in their baskets hung from trees.

“Do you believe?” he cried.

The RIAA sat up in bed almost briskly to listen to its fate.

It fancied it heard answers in the affirmative, and then again it wasn’t sure.

“What do you think?” it asked Peter.

“If you believe,” he shouted to them, “clap your hands; don’t let the RIAA die.”

The clapping stopped suddenly; as if countless editors had rushed to their offices to see what on earth was happening; but already the RIAA was saved. First its voice grew strong, then it popped out of bed, then it was flashing through the room more merry and impudent than ever. It never thought of thanking those who believed, but it would have liked to get at the ones who had hissed.

Only joking. The RIAA died. Because DRM doesn’t exist.