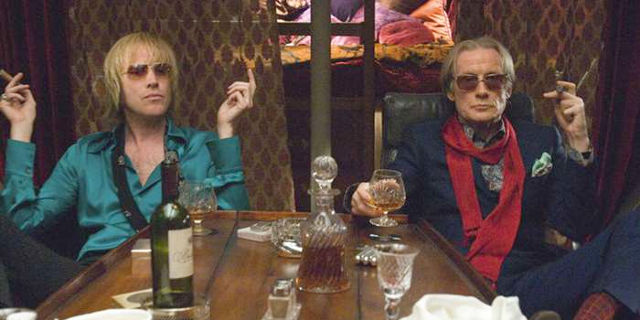 I was hoping The Boat That Rocked would at least be fictionalised reality about British pirate radio in the sixties, in the manner of Twenty-Four Hour Party People. It’s not — it’s a story invented from whole cloth reminiscent of historical events.

I wanted rocknerd kicks all through the night and didn’t get them. This film gets worse the more you think about it afterwards. Emotional manipulation and the comedy of embarrassment. All a bit Richard Curtis.

I wonder who the DJs were supposed to be. The Tony Blackburn character’s obvious. But no John Peel character is an unspeakable omission. Bill Nighy is perfect as the station owner. I also wonder how well they did on the Prime Minister and Cabinet. (The minister of technology at the time was Tony Benn, who I can’t see behaving quite like that.)

The most stirring scene is (highlight for spoiler) the abandoned records floating underwater. Because they’re the character I’m most interested by. Way too mainstream though.

One to watch on DVD if you happen to be in the room at the time.