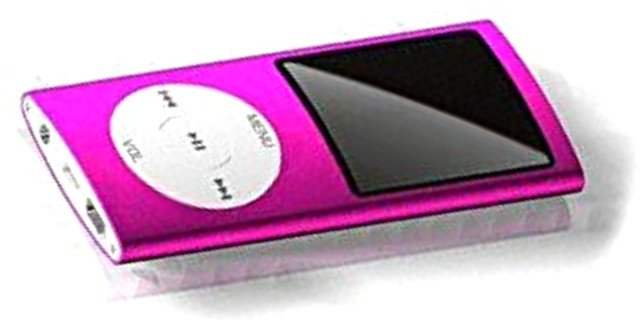 I got a new MP3 player for Christmas from Arkady. It’s a cheap shitty ChiPod — S1 chipset-based. I actually asked specifically for a cheap shitty S1-based ChiPod because they play Oggs and I happen to have a shitload here. (Doesn’t say in the manual they do, ‘cos supporting Ogg means Thomson charge you ten times the price for the MP3 licence. So they just snuck it in anyway.) Pink, 4 gig, looks like a fake Nano 4G, torturous interface. JUST WHAT I ALWAYS WANTED!

With SkullCandy Ink’d headphones. Apparently these are “hep” with the “kids.” They just happen to be pretty good for ten quid (seven on Amazon). Left and right aren’t marked, as is apparently the fashion these days (telling left and right isn’t “fab” or “bling” or whatever the “emo” term is). But if you’re too cheap for Sennheisers or Etymotics, they’ll do very nicely, thank you.

‘Pod is filled with This Kind Of Punishment, ’80s New Zealand indie on Xpressway. 1, 2, 3. Never say I never give you anything.

Redcountess blessed me with What Would Keith Richards Do? (“Everything.”)

Oh, and my mother gave me Christian Rock. I don’t dare play this thing in case it causes a vortex of suck consuming all in its wake.

So. How was your haul?

3 thoughts on “So how was your haul?”