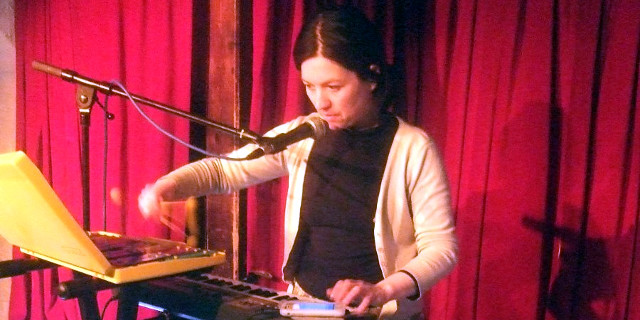 The Betsey Trotswood is a tiny little pub in Farringdon that sells actual beer instead of the fizzy piss found most places basement indie has to resort to. They were selling Bucketfull of Brains at the bar. Holy crap, I remember that zine from twenty-five years ago! (So whatever happened to Jon Storey?) The downstairs room is a cellar kitted out with lights and a PA.

Hissing At Swans are two girls with ukulekes and back-projected video. The music is dinky indie and the lyrics are cutting dissections of the inestimable joy of getting a degree in order to become an underpaid office administrator. It worked.

Hong Kong In The 60s are three people with shockingly good songs. They apologised for tweeness and they were completely wrong. The songs are substantial and muscular. They have digested the history of indie pop back to about the mid-sixties (here’s to Astrud Gilberto) and are giving it back. This band is worth your attention. Get the EP.

So I came out tonight to say hi to Laura MacFarlane, whose way with music I’ve been a fan of for about twenty years. She not only writes songs, she’s one of these people who can pick up any instrument and get something decent out of it. Tonight she’s doing a solo gig entirely on borrowed equipment. And also doing the sound, after the soundwoman dropped out at the last second. I suspect if you gave her a piece of string and dropped her in the middle of the desert, buzzards circling overhead waiting to poke her eyes out, it’d take her fifteen minutes to mike up the buzzards perfectly. And the show would rock. Instrumentation is a keyboard and voice, xylophone and voice or guitar and voice. Guitar direct into PA, of course, “I don’t know why anyone brings amps to gigs.” (Atoms. A curse.) I was delighted at the finish with The Man Whose Head “Woekender.”

So, yeah. I haven’t been to a gig in literally years. This was twenty people in a basement room, including bands and promoter. Its cultural impact will be laughably negligible. But it rocked, and I had a good night out. So there. Photos.