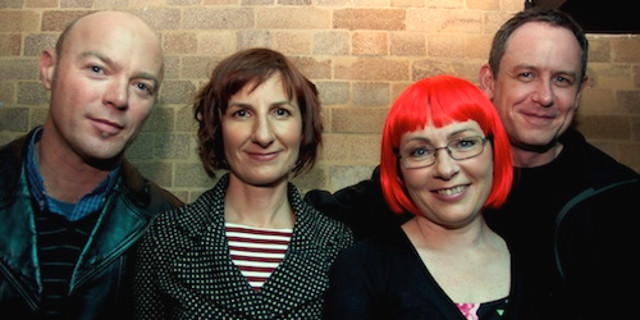 The Clouds, The Wonder Stuff and Jesus Jones make a very good combination of acts, although holding the event at The Palace was a questionable choice. It is true, the triple split-level art noveau style from the early twentieth century has a great deal of dilapidated charm, but the acoustics are not the best. The three bands in question were, of course, very significant in the late 80s and early 90s but had only a modest amount of activity since then. As a result there was a fairly narrow age-band among the punters that had come along for the night.

The Clouds, who have always reminded me of a punk version of Enya, played well but were plagued by very ordinary mixing which has completely wrecked my recollection of what they actually played, or at least that’s my excuse. My addled brain seems to vaguely recall the delightful “Anthem”, the less impressive “Alchemy’s Dead”, and the charming “Say It”. Or maybe I dreamt it. What could not be mistaken however was the final piece, “Hieronymus”, where everything did fit together ‘just right’ and proved to be a popular conclusion of their set.

Less prone to such problems due to the style, The Wonder Stuff, performed an expected beer and cider swilling and stomping set (was it at all surprising to discover that the former drummer of PWEI has joined them?). Their enthusiastic set included many old favourites such as “Caught In My Shadow”, “Size of A Cow” (I recall a colleague moo-ing to a total stranger when that song was popular), “Don’t Let Me Down” and “Give, Give, Give”. New member Erica Nockalls certainly deserves mention for skill and style; as she describes herself “professional violinist with futuristic hair”. Yeah, and the fact she must stand over six foot as well.

Finally, my preferred band of the set, Jesus Jones provided their impressive and energetic combination of indie-rock and electronica. I’ve always appreciated how on the ball for their time they were with broad social and technological change. Coming out punching with “Who, Where, Why?”, “Move Mountains” and “International Bright Young Thing”, the Joneses certainly had a string of popular songs to draw from, and did so with “All The Answers”, “Real, Real, Real”, “Never Enough”, “Right Here, Righ Now”, “Zeroes and Ones” and their most famous piece “Info Freako”. The provided all this and more with a minimal of issues, even with a “slightly energetic” (ahem) keyboardist.

Overall a very impressive night, that was surprisingly inexpensive given the acts present. Although the mixing and acoustic was not always the best during the night it was acceptable and certainly a minor issue compared to the quality of these returned performers, all of whom it must be mentioned interacted well to an appreciative audience. Welcome back, all of you.