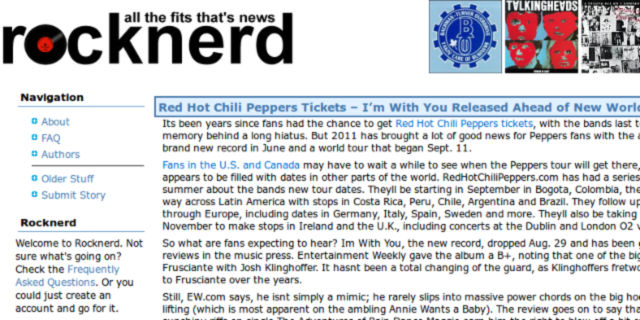 There is, er, something there. It appears to have a new story or two mixed in with old ones from 2006, all dated September 17th, 2011 or thereabouts. The software is not the Slashcode that Rocknerd v2 ran on, but appears to be mangled copies of the original content, roughly dumped into WordPress. The whois was previously registered to an eastern European domain squatter, but now names someone in Canada, with the IP address in the US. The site still claims to be run by Ben Butler and me. I haven’t heard from Ben in years.

What on earth? Does anyone have any idea what this is about?

(And if anyone cares that much, I do have a database dump from the tail-end of Rocknerd v2. But playing Gillian McKeith with the products of Slashcode is so tempting I haven’t even unzipped it in five years.)

Update: someone bought the domain name with plans to do new things with it and thought putting up the old content would be more useful than not while he works out what to do with it. (I suggested it should start afresh — and I really should get around to processing that database dump.) I look forward to his new thing.

3 thoughts on “What on earth is up with rocknerd.org?”