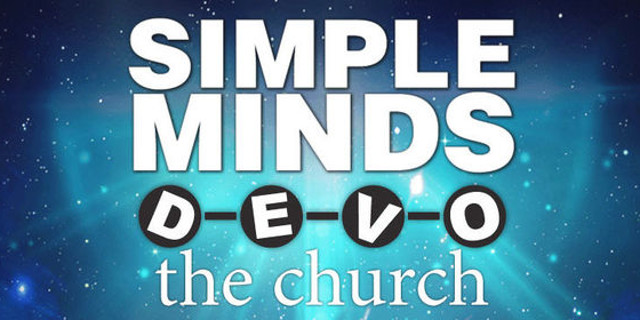 Among the aging fans of good eighties music the prospect of The Church, Devo, and Simple Minds all at one show came with some enthusiasm. It was certainly one of the more surprising lineups that remained within the time period although each band could, in a pinch, be considered as tangental directions in the new wave, post-punk style. The Palais, of course, is a beautiful venue; built in 1927, it has absolutely gorgeous deco and neoclassical features, encouraging artful levels of minor dilapidation. Albert Speer would have been very excited with this example of Ruinengesetz and true to such design, the Palais remains the largest seated theatre in Australia, with a capacity of close to three thousand. Unsurprisingly, the show sold out quite quickly, even with follow-up performances both in the state and across the country. The crowd represented a strange visual snapshot of the period; mostly older with a smattering of young folk, and mostly culturally mainstream, a gentle reminder that what was mainstream then is alternative today.

As an obligatory local talent act, The Church started the show with the enthusiasm that comes with their neo-psychedelic alternative rock. Infuriatingly given but a half hour set, which I missed most of, they performed the best they could to a hall that was only a third full, with a set including from their earlier material (e.g., “Almost With You”, “Under the Milky Way”) to contemporary songs, such as “Sealine” (well, it’s more contemporary), before concluding with powerful rendition of “Block”. Having brought a fine collection of small speakers, their sound carried reasonably well throughout the hall, even if it did have a pub-rock quality to it. Particular thanks must be given here to Mark David Walsh who managed to collate a set list for me.

Possibly the world’s most self-consciously geek-band, Devo has always made great effort with their extra components to accompany their eclectic musical style, and this hour-long concert was no exception. With their trademark energy domes, radiation jump suits, and safari suits, etc they engaged in at least three rapid costume changes throughout the show, kindly distributing discards to the audience. Their lighting and video accompaniment also suited well, albeit the latter sometimes made the more subtle sexual content of their lyrics (e.g., “Peek-A-Boo”, “Fresh”, “That’s Good”). Classic tracks such as “Whip It”,”Girl U Want”, and “Mongoloid<" attracted the attention they deserve, and one could be very pleased with the way that "Smart Patrol/MrDNA" was combined with "Gates Of Steel" with clarity, following some fairly ordinary examples of sound quality. A surprisingly omission was their latest song "Don't Roof Rack Me Bro". Unfortunately, the limitations of the venues sound system was becoming obvious - a poor distribution of speakers requires mixers to pump up the volume so it carries throughout the large venue space. But when this is done beyond the capacity of the system, some pretty horrible distortion sets in. This became very obvious when the headline act, Simple Minds, performed. This band, of course, is built on a highly polished and subtle sound which unfortunately did not carry on the night. With an hour-and-a-half set the headline act was clearly the reason why most people were in attendance, the massacring of "Love Song" and "Waterfront" generated grimaces throughout the audience, despite the obvious efforts of the band with Jim Kerr crooning and prancing about in an attempt to focus attention. The show was not helped by a audience-hating light-show which seemed to think that obscuring the stage whilst targetting the crowd was a winning strategy. A appropriately quieter version of "See The Lights" sounded notably better and "Don't You (Forget About Me)" and "Someone Somewhere in Summertime" were tolerable and highly appreciated by those present. Concluding with a four song encore, they certainly took a lion's share of the concert time. Overall this concert was a mixed blessing with a combination of great acts, great location, great selection, and a fairly ordinary sound and an unfair distribution of time. Because their worst sound came with the band which required the best quality and was on stage for the longest period, the entire concert as a whole was spoilt. The possibility of improvements should be fairly obvious - give the supposedly "lesser" ranked band a little more time to perform, and fix the sound system. Setlists:

(The Church: Metropolis, Almost With You, Sealine, Reptile, Under the Milky Way, Block)

(Simple Minds: I Travel, Thirty Frames a Second, Love Song, Celebrate, Waterfront, In Trance as Mission, The American, This Fear of Gods, See the lights, Don’t You (Forget About Me), Someone Somewhere in Summertime, New Gold Dream (81-82-83-84), Sanctify Yourself, Promised You A Miracle, Glittering Prize, Alive and Kicking)