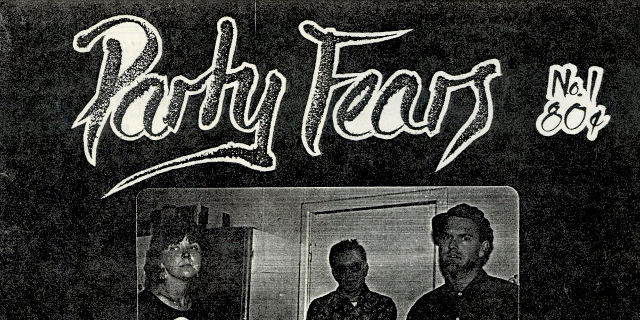 #18¾ was my side of a one-page zine to be done with Louise Dickinson of Lemon that she never did her side for. I’ve cleaned up the pile of fragments I had to hand and called them #19. Interviews with the Ampersands, Dave Graney, Dirty Three, Mardi Picasso, Mustang!, Reichardt (a local prankster) and Sonic Youth (1989). Live stuff from 1992 to 1994, and Australian Roadfool, the diary of my first visit to Melbourne and Sydney (and there’s almost no-one who remembers where I got the name from). And a pile of reviews, including of magazines about the nascent cyberculture. It’s a better read than I remembered.

There’s also me interviewed in Woozy and my answers to a newspaper questionnaire on zines.

The Party Fears archive is now complete. The only thing left to do would be to transcribe all this stuff into a searchable format, but I can’t be bothered and neither can you. The next thing would be to dig out my other fanzines and start scanning. This is something you should do too.

The only question remaining is why this took me fifteen years longer than it should have. I started sorting through this stuff in 1997. I think I was still suffering delusions of print.