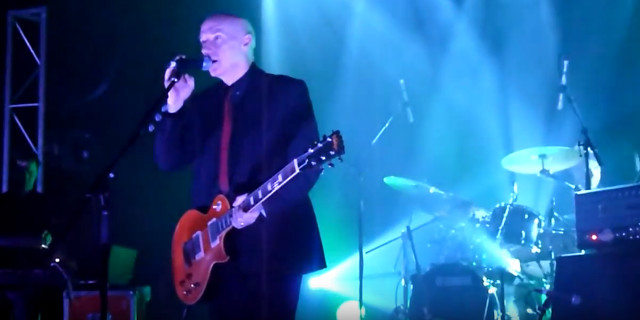 Midge Ure is a musician who shouldn’t require much of an introduction. He’s travelled from from the Rich Kids in the 1970s, to Visage, to leading the reformed electronic rock group Ultravox from the early to mid 80s with a succession of hits, to co-organising Live Aid and Band Aid with Bob Geldof and then a successful solo career. With the recent reformation of Ultravox and very successful concerts (e.g., Return To Eden), it was a little surprising to see him visiting Australia – for the first time in over twenty five years – as “Midge Ure” rather than as part of “Ultravox”, although later in the evening we are informed that this tour is a stalking horse for a future Ultravox tour. Certainly if this is the case, they might be giving second thoughts to the matter. Partially because of fairly poor promotion, and possibly because it was Midge rather than Ultravox, the turnout on the night was significantly less than what would be expected. One has to say it would have been a little bit of a step down to the person who has performed to concerts of scores of thousands and for the person who co-wrote and produced what was the highest selling record UK single.

The support act for the evening was Sammy Paul, a two-piece who played alternative disco – something along the lines of Bronski Beat meets Bananarama. Not exactly to my taste, but performed fairly competently, and with some local coverage from radio JoyFM and production with Peter Hammond has generated some interest. The incessant chattiness and attempts to pump up the audience however fell fairly flat, as it just wasn’t the right music for the crowd. Perhaps the most appropriate tune performed in their forty-five minute set was an interesting and appealing cover of Gary Numan’s “Are Friends Electric?”

Midge’s show started a little slowly with average enthusiasm being expressed by the punters. This is not entirely surprising, as he concentrated on material from his solo career, such as “Dear God”, “Answers To Nothing”, “Breathe” (which he proclaimed as the best song he’d ever written), the cover of Tom Rush’s “No Regrets”, and the oddly catchy “If I Were”. In addition to these there was also an excellent and popular rendition of “Fade to Grey”. Given that Visge is about to release their first LP in 29 years (Hearts and Knives), perhaps Mr. Ure knows something about the impending line-up that the rest of us don’t. A world Ultravox and Visage tour? Now that would be something!

Just over a third of the way through the show, whilst explaining we’d have to wait for a later point for a full show of said music, Ure and his supporting musicians launched into a powerful guitar-heavy version of “One Small Day”; despite missing some of the synthesizer chord progressions of the original version, this was wildly received, setting a not-too-subtle hint for the rest of the night. Whilst one can certainly not blame Midge Ure for playing the music of Midge Ure, it was fairly clear that well over half the audience wanted o hear the Ultravox of c1979 to c1985. The thing is, Midge Ure and the latter Ultravox play material that is performed with professionalism and competence, but lack the epic feel that this period of Ultravox provided (and, I should say, as did the period of John Foxx). So when the band played “Vienna”, the audience alternated between singing along gusto and simply absorbing the finely crafted sounds in complete silence. Likewise “Love’s Great Adventure” was a very welcome and unexpected inclusion, “Hymn” took off like a rocket, and the encore of “Dancing With Tears in My Eyes” was very well received.

Overall, it was an excellent show, assisted by being held in what is Melbourne’s best small venue, Billboard. This is a place which is clean, with reasonably priced drinks, and where the comfort of the patrons is actually taken seriously. Furthermore the design of said establishment allows for good acoustic resonance and allows for areas where people can actually hear each other talk. Also, whilst on this topic, credit must be given to the oft forgotten and yet possibly the most important member of every live performance, the mixer. For this show, a grey-haired elderly lady carried out the task to near perfection, far exceeding in ability many others I have had the misfortune to hear over the years. If it is a fact that one’s hearing declines with age, especially in with the higher Hertz, this particular mixer must have been in the world’s top 0.5% in their youth. Either that or they have near-perfect knowledge of which pitch works with a particular volume. In any case, anonymous mixer, more power to you – and we can only hope you get the gig when Ultravox as a full band tours as well.

Oh yes, and it does remain a crime against culture that Joe Docle’s “Shaddup You Face” kept “Vienna” off the number one for weeks and weeks.