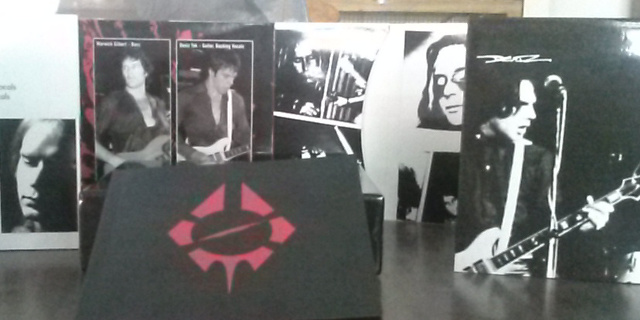 Courtesy of our friends at The Dwarf your author had the opportunity to see the legendary Radio Birdman as long as finger was put to keyboard in review. This iconic founding band of Australian independent rock and punk from the 1970s announced a reunion tour and concurrent with this was the release of an extraordinary CD boxed set consisting of all three early studio albums, a previously unreleased live album of the notorious Paddington Town Hall gigs, a DVD of various videos, three bonus discs of unreleased material, and a forty page booklet of images with an essay about the band from their earliest days by Toby Creswell, all packaged in a solid black box with the red Radio Birdman logo.

“How much?”, I inquired at the merchandise stall. “Ninety bucks”, said the salesman. “Shut up and take my money” was a very legitimate response. OK, I’m an old man now and somewhat more polite and instead engaged in pleasant conversation about how one’s PIN doesn’t have to be four numbers. But hell I sure did think it. And what a great purchase this surely is. Inside the box there are four heavy disc packages, each of which unfolds to provide two discs in each. Take them all out and you can set them up like a DM’s screen of Dungeons & Dragons meets Radio Birdman; “Save vs Punk Rock!, Haha! Only kidding, there is no saving throw against punk rock!“.

The first is a remastered version of the band’s iconic Radios Appear album from 1977, which still sounds fresh, powerful, and truly transformative. You can smell (metaphorically, unless if you have synesthesia) how this music changed Australian rock, from ‘Murder City Nights’, to the the bizarre lounge music of ‘Man With Golden Helmet’, the softer ‘Love Kills’, and the punters chorus in ‘Hand of Law’ and ‘New Race’. Thank goodness for 2JJ; without them this album may have never been noticed except outside a handful of well-placed aficionadoes. The bonus disk for the first album includes a remastered version of the entire ‘Burn My Eye’ EP, the first release of the band, followed by an impressive semi-acoustic version of ‘Love Kills’, and rarities such as ‘Insane Alive’, ‘Snake’, along with other original outakes.

Now the second album is also Radios Appear; for there were two releases of Radio Birdman’s first album, one for local consumption, just described, and a longer international version, with substantially differences in songs and order. The international version includes the delightful surf-punk melodies of ‘Do The Pop’, the frankly brilliant tribute of ‘Aloha Steve and Danno’, and their cover of the 13th Elevators, ‘You’re Going To Miss Me’. In this case bonus disk includes a dozen tracks of material from the Trafalgar Studios in 1976-77, of which the cover of MC5’s ‘Shakin’ Street’ is of particular note.

The third album is Living Eyes, the last recorded album from their original incarnation and not released until three year’s after its recording in Monmouth, Wales. Perhaps more polished but never as popular as the first album, it nevertheless really includes some great tracks like the opening ‘More Fun’, the revhead sounds of ‘455 SD’, the synth and backing of ‘Crying Sun’, and the concluding track ‘Hanging On’ predictive of what The Stranglers would become. In this instance, the bonus disc contains no less than twenty tracks, including three live tracks from Paddington Town Hall from the December 1977 show, and ‘Alien Skies’ written by keyboardist Pip Hoyle.

The DVD of the Paddington Town Hall concert of December 1977. The booklet essay explains how this was the last Australian gig for Radio Birdman. Originally Birdman was planned to be the support act for Iggy Pop, but at the late in the piece he had to pull out, leaving the concert to Radio Birdman alone. Creswell explains in concise and accurate terms: “The Paddington Town Hall show is, I think, the defining document. Hearing it almost four decades on it has captured the ragged glory, the shock and awe of Birdman in full flight”. The concert disc includes eighteen songs, starting from their an incredibly energetic version of their anthem-like ‘New Race’, ‘Descent in the Maelstrom’, ‘Dark Surprise’, ‘I 94’, and including covers of Blue Oyster Cult’s ‘Transmaniacon MC’, Bo Diddley’s ‘Let The Kid’s Dance’, and concluding with MC5’s ‘Ramblin’ Rose’. In this case the bonus disc is also a DVD including two videos from said show, one from the same venue from a several months earlier, a promotional video of ‘Aloha Steve and Danno’, and two videos from a 1976 show at Macquarie University, videographer unknown.

Overall this is just a superb package deal. It is extremely well produced, both in the physical packaging and the remastering by Deniz Tek and Wayne Connolly. The essay by Creswell is insightful, evocative and clever, and the images throughout the disc packages and booklet give a great sense of the spirit of the times. Perhaps, to make it complete, the inclusion of Zeno Beach could have been added as well. But as it is, this is the perfect collection of classic Radio Birdman.