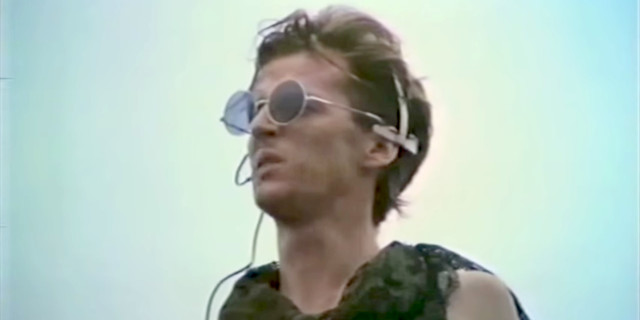 This album, which I played a few days ago for the first time in thirty years, is what the kids these days describe as a “hot mess”. A pile of good ideas mashed in with a pile of terrible ones; the result desperately pretends to work.

The Models started in Melbourne in 1978. They had a certain charm and a way with a new wave pop tune; their early stuff is well worth a listen.

The next two singles off The Pleasure Of Your Company didn’t sell well. So they did the 1984 standalone “Big On Love” as a direct chart assault (and it sold okay). It is … not as good as I remember it. I loved this when it came out. I remember it as being much more mechanical and dance-industrial than the actual record in front of me. You can hear what I mean, can’t you? Tell me you do.

They got competent management, in the shape of INXS’ manager Chris Murphy, and moved from Melbourne to Sydney. As Wikipedia puts it, “under the influence of Murphy, they reassessed their direction and moved towards to a more radio-friendly format.” i.e., sounding a bit more like INXS.

Their keyboardist, Andrew Duffield, wasn’t so on board with this, so they fired him. The problem there was that Duffield was coming up with most of the tunes.

So they got James Freud, who joined in time for The Pleasure Of Your Company, to write a bit more. Freud had replaced the previous other good songwriter, Mark Ferrie. The trouble there was that Freud was … not that good.

So, another pre-album single while they desperately tried to write an album’s worth of acceptable songs without the writer of good songs on hand! “Barbados”, sung by Freud (rather than band leader Sean Kelly) (and one of the last co-written with Duffield), did very well (national #2). It’s a pleasant piece. Lightweight, but works well.

Next single was “Out Of Mind Out Of Sight”, establishing the album theme. The song was made of hooks, it had all the right pieces in all the right places, and radio loved it and it sold a zillion copies (national #1, single-handedly pulled the album to national #3). In 2016, it sounds a rather shakier proposition than in 1985. You can hear everything it’s doing and it’s not doing it so well. But it sufficed at the time.

Out of ideas, they rewrote the previous hit. “Cold Fever” is fucking terrible. All the not quite right pieces in not quite the right places. It sold some copies on the back of the hit, but not for its own sake.

The rest of the album is about that standard or worse. It’s forty minutes of desperation to fill space. It turns out firing your main music writer can cause problems.

They stumbled on, their fame having long outstripped their songwriting ability. Next album Media is not worth your time. The half-decent single was “Evolution” and that’s a bunch of pieces shoved together pretending to be a song. I saw them live around this time and it sorta worked with the whole audience on your side desperately willing you not to suck, but it didn’t really hold up even then. The best thing about Media was that the B-sides of the 12″ singles were the good 12″ mixes of the singles from The Pleasure Of Your Company.

Sean Kelly did the Absent Friends, who were ehh OK on a rather better-funded level. (Duffield also participated.)

So yeah, get a copy of The Pleasure Of Your Company, it’s pretty good. I particularly recommend “God Bless America”, a nice example of that particularly ’80s genre the post-apocalyptic pop song. You kids, living without the expectation of nuclear flaming death at four minutes’ notice. Lyrics and videos like this entirely fit the mainstream zeitgeist of the day.