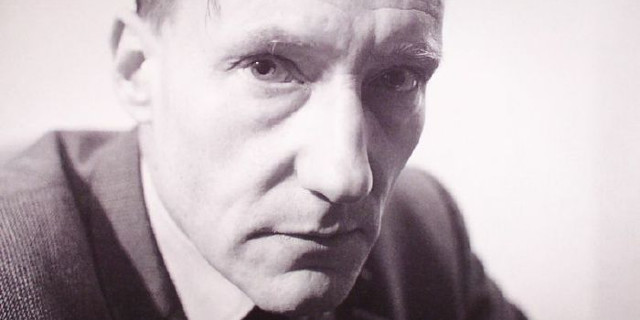 This is a fabulous photo of my problematic favourite, William S. Burroughs. Most photos you see of Bill are of an old man. And he did delight in the role of curmudgeonly elder statesman. But he was really babyfaced, his face almost blurry in his youth, giving away nothing of the mind at work behind it. 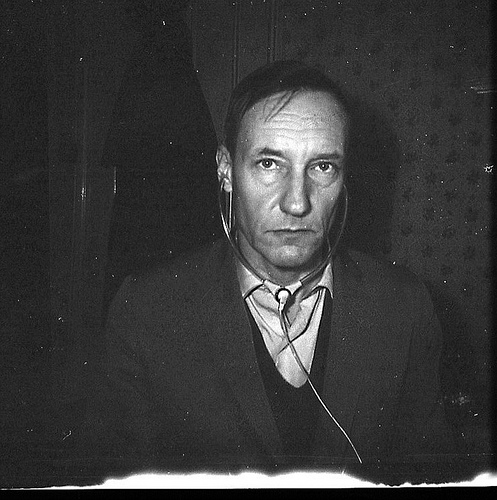 I admire old Bill for all sorts of things, none of which are his personality, murdering his wife, fucking up his son or misogyny so jawdropping he literally made it into an artform. I wonder what signifiers wearing a Burroughs shirt would have in 2016 as opposed to 1996 (“yeah yeah you’re hip go away”) or 1986 (“who?”).

(The important difference is that 2016 has no shortage of edgelords, whereas back in the prehistoric times before history started in 1995 we had to work at our edgelordery dammit.)

There’s a photo I can’t find on the web, from Literary Outlaw (UK, US) (which is still the best-written biography I’ve ever read of anyone) of Burroughs around this age, 40-50, when he was just getting some definition in his face. It was a passport photo, very blank and bland — but the character just starting to come in. I was going to stick it on the wall of the house I lived in in 1996, but another housemate objected on the quite reasonable grounds that Burroughs was a fucking reprehensible human being who repulsed them. (Though he’s still vastly more important to pretty much anything than e.g. me. Bah.)

Leonard Cohen’s face did much the same; here‘s an ill-at-ease young Montréal Jew, and here‘s a 1966 shot where he’s just getting some character in. Or indeed Nick Cave, who was an ugly bastard, knew it and didn’t give a shit in his youth, and somehow matured into being actually handsome from about forty to fifty.

The above shot, from 1966 aged 51, is a better photo because he’s engaged in some of the tape recorder stuff that was one of his more substantial contributions, which incidentally kickstarted industrial music as we know it.

William S. Fucking Burroughs. The perfect slacker role model. Harvard bum in his youth. Got into heroin and hung out with criminals to be cool. Didn’t get around to writing his great work until forty-five. Lived off his parents till he was fifty. And still changed the face of western culture. You should do so well. 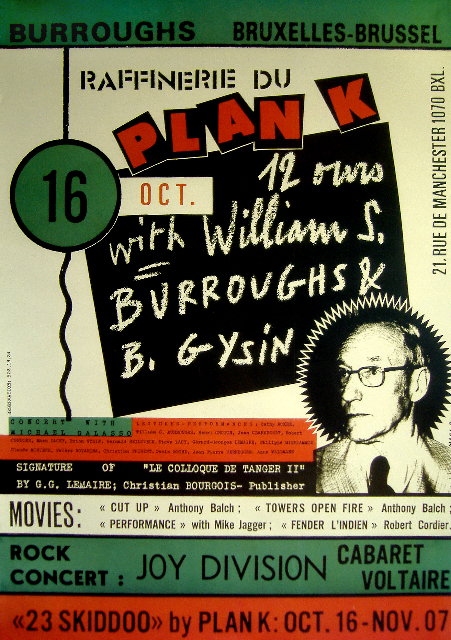 This is the 1979 concert in Brussels where William S. Burroughs reputedly told Ian Curtis of Joy Division to fuck off. Sadly for the legend, the consensus of those around the event was that it would have been out of character for Burroughs (who was consistently gentlemanly to fans in quite trying circumstances, e.g. a loud post-punk concert when you’re jonesing and desperate to get to Amsterdam) and the words “fuck off” probably weren’t actually said. By the way, here’s Jon Savage on Curtis’ literary influences, particularly Burroughs.

(This being the Internet, this single question has of course been researched in ridiculous detail. A post which says much more about this style of obsessive laser-focused investigation — which I must note I’m a great fan and frequent perpetrator of — than about the topic.)

So! Which Burroughs should you start on to catch up? Well. I had a good old go, and always found his ideas vastly more interesting than the books housing them. I stick to the secondary material by preference: the Re/Search book, the biographies (even as they straightfacedly transcribe his more frankly delusional claims), the coherent nonfiction, the recordings of readings. You probably need to plough through Naked Lunch at some point. Some people think the fiction is actually godawesome, but your mileage will vary greatly.

Also make sure you read You Can’t Win by Jack Black, famously one of Burroughs’ biggest influences. It’s an excellent book that was a bestseller in its day and it’s only remembered now because Burroughs was a huge fan. Your jaw will drop at how weirdly Burroughs interpreted it. Here’s hoping the recent film version turns out okay.

Top photo: by Harriet Crowder, from the recent LP Curse Go Back, put together by Jim Pennington. No idea of source on Tape Recorder Bill — anyone?

One thought on “My problematic favourite: William S. Burroughs.”