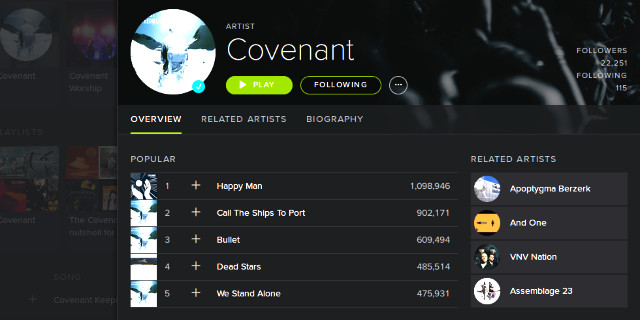 Yeah there’s a Linux version. Though the web interface is much the same and I could have just used that. Just running ad-supported as yet, I can put up with the ads so far for a bit of programmed variety and I have a mute button.

I tried Last.fm around 2009 when I was applying for a job with them. The computer-generated personal radio station thing is amusing in its way. I can’t see myself wandering around with my phone using up my data plan on streaming music; it’ll be strictly a desktop, or rather laptop, thing.

I consciously and explicitly gave up on this “keeping up with popular culture” lark in 1990, when I picked up a copy of Smash Hits and literally the only thing in the chart I didn’t thoroughly despise was “Sometimes” by Max Q, and even that mostly on principle. I even consciously and explicitly gave up keeping up with indie rock in 1992, though that was more just hipster fatigue. So I’m looking over the UK “Top 50 viral hits” chart (where are all the other weird minor charts huh) and going WHO THE FUCK ARE THESE PEOPLE. The names look like a terminally unhip fiction writer’s idea of what pop stars might be called.

Well-produced, but; the pop music sounds beautiful these days, even as the songs themselves are same-old. I need to work out how they’re doing this stuff (on a deeper level than “pressing all the buttons in Ableton Live”). I am very conscious that I am the old people now and look to young people like old people looked to me in 1984. I wonder how I can get my head around pop music in 2016, insofar as that’s even a worthwhile idea. I aspire to write songs, which would probably benefit from at least slight awareness, even if my effective target audience is people a small variation from myself.

Current favourite: the generated VNV Nation and Covenant stations. EBM hits straight out of last decade and particularly clustering around 2001. I was reminded what an underappreciated album Covenant’s Skyshaper is. Their first after their abortive essay into the major label world, which involved Sony putting Northern Light out as a non-Red Book fake CD and the base getting pissed off and buying the Metropolis edition instead. “We are the men. Silent and cold. Beautiful eyes. Sheep among wolves.”