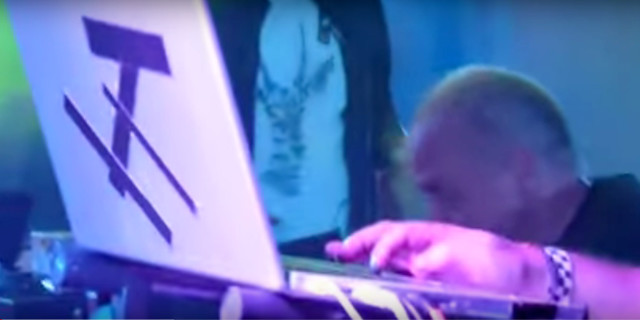 Scattered Order are an Australian noise band who are probably “industrial”, but you never see them in any lists of industrial bands, and that’s just wrong. They have never been popular in any sense. They remain good and important, however, and have persisted. Modulo a decade’s break here and there.

The band started out in the Sydney noise band scene of the early ’80s, the same one Severed Heads came out of. They fostered said scene with their own M Squared label (“not even a good idea”). The last M Squared release was their own 1983 mini-album I Feel So Relaxed With You (My Spleen Sometimes Shows), which sold 48 copies total. (And I was one of those 48 buyers at the time!)

Gap Records, the Australian licensees for Factory, had just renamed to Volition and signed a few more people locally. The label’s first release under its new name was Scattered Order’s A Dancing Foot and a Praying Knee Don’t Belong on the Same Leg. They released several more albums and EPs on Volition. None were great sellers, but they did get consistent music press at the time (or at least reviews in RAM) and evidently did well enough for Volition to keep putting their stuff out. Some was even pretty straightforward!

Volition tried giving their 1991 slab of obnoxious racket Professional Dead Ball a big push, in tandem with Cuisine by Severed Heads, Vertigo by Boxcar and Like Stars In My Hands by Single Gun Theory, as “An Intro To Techno”. The Scattered Order album was not quite a four-on-the-floor pounder that would have appealed to new KLF fans.

I saw Scattered Order at the Public Bar in Melbourne in 1998. One of those seeing a band you’ve hoped to for years. I was not disappointed; they’re definitely a band you should see doing it live. The bar was disconcertingly not packed (I keep being surprised at nobody else giving a hoot about my long-followed favourites), and I was wishing I’d brought my records with me for them to sign. Chatted to Mitch Jones afterwards, who was lovely. I was deeply disappointed I couldn’t see them the next night at the Espy because I was literally in the middle of moving house and was lucky to have got that night away from the process.

Scattered Order’s new album is Some Men Remember Music and it’s up on their Bandcamp, along with not all but much of their older stuff. It’s pretty nice for abrasive racket; cosy soundscapes for the aging industrialist. You’ll like it. Surprisingly accessible for this sort of thing … or maybe the world’s caught up. “works best on immersion in its noise and ooze; letting it creep over you like flesh-eating fog.”