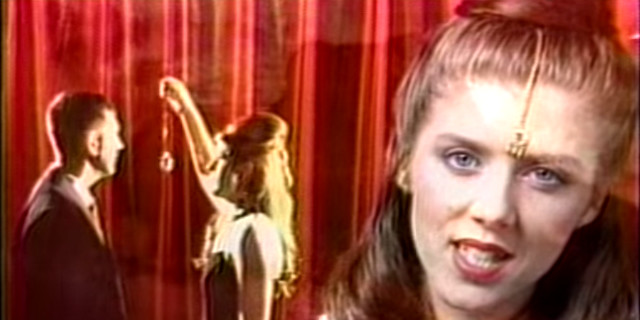 Severed Heads’ actual hit single, “Dead Eyes Opened 1994”, in which ‘80s industrial — from the days when you had to get out the bloody soldering iron and build your bloody equipment — is whipped up into a ‘90s techno splurge. At least it was an actual nearly-member of the band (Robert Racic) doing the whipping.

(yes, another heavy on the strobe)

Note that the graphics are from assorted custom-built stuff and not just rendered on an Amiga. Severed Heads pioneered the Amiga-look industrial video, before they even had Amigas. (Way before.)

I’ve seen Severed Heads three times. First time was Perth in late ‘91 on the Volition Records “An Intro To Techno” package tour. At this point “techno” still specifically referred to original Detroit techno; the pounding four-on-the-floor stuff the KLF were topping the charts with was various hyphenations of “-house”. Volition almost certainly meant something a bit more like “industrial”, but for some reason people then seemed reluctant to say that word with a straight face. I’ve mentioned this tour on occasion before, and was most disappointed Scattered Order didn’t make it over to Perth too. The promotion included an actual “win some records!” competition in Party Fears #17. (And here’s the first page of that.)

First up was Single Gun Theory, who had a JJJ hit at the time with “From A Million Miles” and a chart album with Like Stars In My Hands. The above video is from the Nettwerk Records official YouTube channel — that is, their (other) actual record company only has an Australian VHS tape recorded off Rage one evening. Single Gun Theory were so lovely. Though clearly not into pretending to be the rock band they weren’t. Mostly backing tapes, a bit of keyboard, spray painting things on stage, that sort of thing.

Next up were the rock band, Boxcar, who were a New Order B-side in white sneakers. The above video is a Sydney show from the time, and … it was basically just like that. The conventional rock band was the least interesting event. First-album Boxcar was not as good a band as it should have been.

Severed Heads topped the bill and were the one everyone had been waiting several years to see. They too weren’t a conventional rock band, they always held people should be watching the tellies. Coupla keyboards, tapes mixed live, video mixed live on a big screen. But it did in point of fact rock, and that’s the magical thing.

Severed Heads next visited Perth in early 1994 to play last band at the Big Day Out, over on the disco stage. A terrible Big Day Out with lots of good bands sucking, but a fantastic finish, the Heads playing the stuff that became Gigapus and rocking even better than ’91. I remember being particularly struck by “Dollarex”, a new one at the time.

Boxcar didn’t make it over to Perth for BDO ’94. Their second album, Algorhythm, added Stuart Lawler and was a vast improvement over the first. (Amiga graphics and all.) Lawler soon also became the musician member of Severed Heads, and was active on the Severed Heads mailing list (the one later branded “Twister 3”) in 1995. Hosted by Rolling Stone Australia, who had heard of this “cyber” thing, and what better band to let them dip their toe in than Severed Heads! This didn’t make business sense on any level, but it was a fun space while it ran. The above video is the radio edit of “Universal Hymn”, but I favour the Pure Pandephonium remix.

The Sevs had had a hit in 1994 with that techno splurge remix of “Dead Eyes Opened” up the top of this post. In 1996, they filled the Punter’s Club in Melbourne with ravers. Not what became cybergoth, but the actual quasi-hippie ravers of the day. Their video equipment had broken and they had to do the show with a large telly at the front of the stage. They got through it okay, even if said techno splurge remix was literally the only track the ravers knew. So ’90s techno splurge, it’s got “’90s TECHNO SPLURGE” down the middle like a stick of rock candy. Here, try the “Reopened” mix.

When we closed shop it signalled a whole bunch of new people in my life. Unlike the last lot they seemed bright and caring and to be really into what we had done. It was great to have new family but after a while it dawned on me that we’d swapped our vampires for undertakers. These new guys throw a hell of a funeral! They like funerals so much they dig up the old bones over and over again.

I love these guys, but they get all anxious if you mention any year past 1980 something and, you know, I ain’t dead yet. So I just did my music. The weird thing being that I started to get jealous of my old self. Man, that guy got all the praise, the smug bastard.

Single Gun Theory are dormant but all alive and well. Boxcar don’t have a shop, but they do have a Soundcloud. Severed Heads’ complete works are available for purchase. Including new stuff. Go on, you know you want to give Tom five bucks.