At approximately 10:20pm BST on Sunday the 20th of September, 2015, the image of the Daily Mail‘s Monday front page hit Twitter. And Britain exploded. 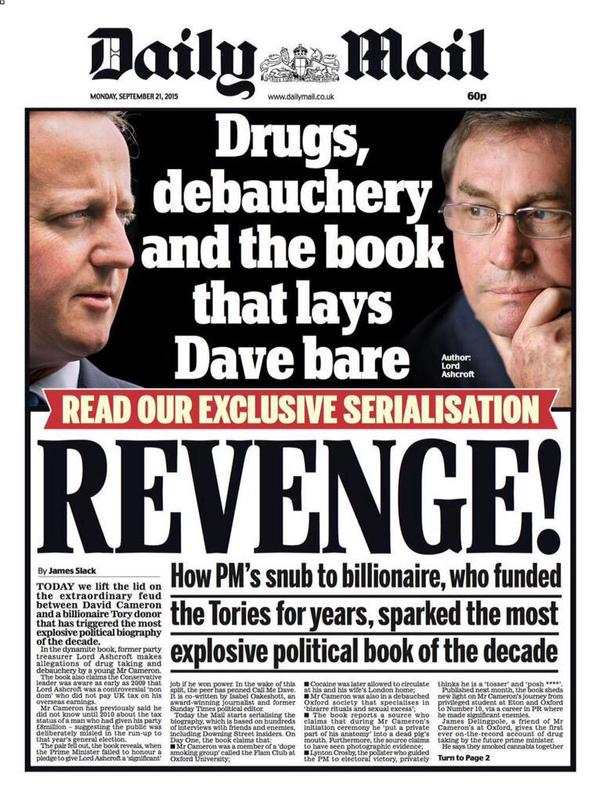 A sample of Charlie Brooker’s script for The National Anthem (2011), the first episode of Black Mirror:

And the advertisement for the episode: 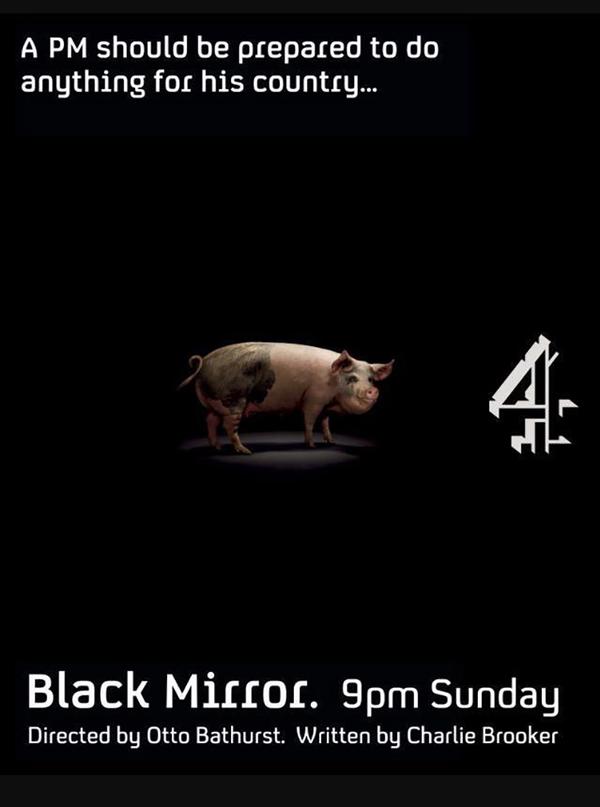 Brooker, who is clearly an Alan Moore level magician, swears he had no idea: 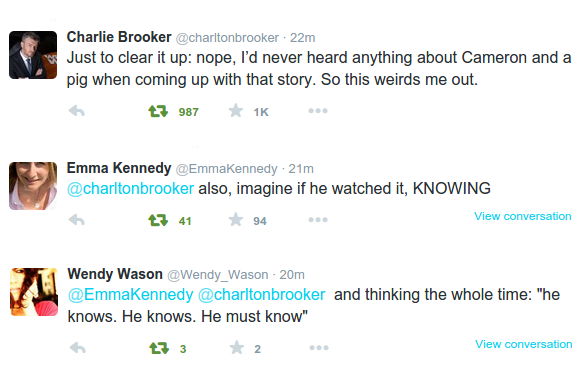 Of course, Brooker quit writing TV Go Home when it turned out he’d predicted real television getting as bad as his deliberately extreme parodies. (And check the 11:10pm programme title for 19th March 1999.)

(Let us assume that we are fucked. Because White Christmas [2014] was heavily based on Roko’s basilisk. Brooker says that when the Piggate story broke, “I did genuinely for a moment wonder if reality was a simulation, whether it exists only to trick me.”)

There is a real story here, and it’s that Lord Ashcroft wanted his revenge on Cameron for internal Tory spats past. So he put in his book a story that so obviously didn’t actually happen that even he tried to distance himself from it in the text itself. Just to make the world think David Cameron fucked a pig. And no doubt kept aside one of his Scrooge McDuck swimming pools full of money marked “DAVID CAMERON DEFAMATION SETTLEMENT”, knowing it would be completely worth it.

And who couldn’t trust in Cameron’s very specific denial:

But what did the public think? They found this story completely plausible. Nobody doubted it. 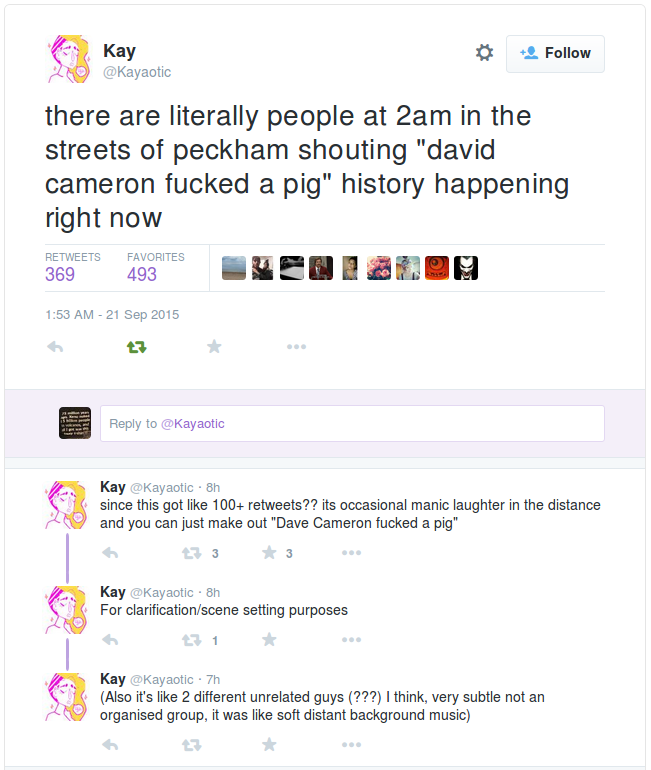 And what did Cameron’s fellow defenders on the right — assorted Tories, journalists, Louise Mensch … when Louise Mensch is defending your public image, you’re basically buggered — think? They defended the idea as perfectly normal and nothing to make a fuss about. Like, who at university didn’t get drunk and have sex with an actual pig.

Not a one doubted the story. They all seemed to think this would have been an entirely Dave Cameron thing to do.

At this point, over 24 hours since the allegations first surfaced, it no longer matters if they are true. Apparently there is photographic evidence somewhere of the UK Prime Minister, David Cameron, performing the act he is said to have performed on the pig. If it appears, we’ll know. But really, it’s not all that important that we are ever given this sort of evidence for the claim. We know. To look at the face of David Cameron is now, and always has been, to look into the face of a pigfucker: his face, is the face of a man who fucks pigs. I think probably we always secretly suspected he was a pigfucker: there was always something a bit off about his face, that previously would have been attributed, I think, to a sort of posh-guy phoniness, like he was trying to convince us he was just a regular bloke whilst constantly struggling against the urge to smash a bottle of champagne over a tramp. But now we know, now we know what it really was: the fact is that David Cameron, the Prime Minister of the United Kingdom, was always secretly trying to suppress the memory of the time that he fucked a pig.

It’s important to note that this did not affect Cameron’s hold on power in any manner. Keep in mind that in his University days in the Bullingdon Club, he (and Boris Johnson) literally sought out homeless people to burn fifty-pound notes in front of, and this didn’t damage the electability of either. The sort of people who vote Tory consider being able to burn fifty-pound notes in front of homeless people an aspirational goal. As Elizabeth Sandifer noted, “Crucially, ‘the one everyone says is unelectable’ and ‘the one everyone says fucked a pig’ are different people.”

(Admittedly, fucking a pig is probably not what Tory voters aspire to. I mean, I could be wrong.)

Elizabeth also offers an extended rumination on why the story absolutely had to feature a pig. And suggestions on Oblique Strategies Appropriate To Fucking A Pig:

Cameron is gone now, having successfully relegated Piggate to the second sentence of his obituary. But Piggate will live in history forever.

And for those darker moments, Sam Keeper offers some words of comfort:

I still have “Gettin’ Piggy With It” stuck in my head