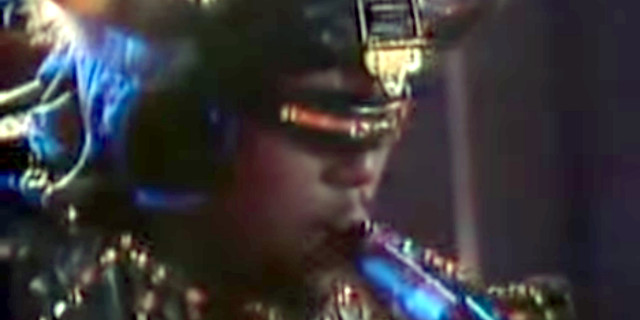 Despite having perpetrated a great deal of it, I’m sceptical as to stories of progressions of musical influence. Artists steal bloody everything from bloody everywhere all the bloody time, and tales of influence told in story form are lies for critics.

So, of course, I’m going to do it again. I don’t often see it noted just what was happening with early hip-hop and English and European synthpop in and from the post-punk era. Hip-hop histories gloss over it, and the reconstructed histories of techno somehow jump straight from about 1988 back to Kraftwerk, as if all that stuff from 1978 to 1984 never happened.

As every child is taught in kindergarten, rock’n’roll came from the blues. (And was really quite black until it suddenly went white with the British Invasion in the mid-’60s, leaving Jimi Hendrix treated as a curiosity.) Disco was the black music of the ’70s glossed up for the suburban consumer. Even though the discosploitation era was as hideous as its reputation, the good stuff remained brilliant, of course. And fed directly into early hip-hop — “How We Gonna Make the Black Nation Rise?” is an excellent worked example of how to take a couple of disco samples, add a drum machine and rap on top.

The fun bit is that it went the other way: the Europeans using electronics were co-opted right back by black music. The English and European electronic pop artists of the early ’80s were hits with the black music audience of New York at the time.

And Afrika Bambaataa and Arthur Baker discovered the winning formula: “Trans-Europe Express” riff plus “Numbers” beat plus rappers equals “Planet Rock”, and the world was never the same again. Hip-hop as we know it — rapping over a drum machine with synthesized sound — is entirely descended from “Planet Rock” in 1982. Other people had done this (and “The Message” came out two months later), but that one’s the flash point at which hip-hop immediately went electro.

(No, the rap isn’t any good. But that doesn’t matter.)

Well, maybe not. But Karl Bartos, then recently-ex-Kraftwerk, did forgive Bambaataa and Baker for their blatant thievery in the service of artistic excellence and did a fucking amazing remix of the track in 1991, thus bringing it full circle.

In this niche, the English showed up pretty early. I was slightly surprised they didn’t do disco better than the Americans and sell it back to them, the way they did with every other pop form. (Instead, they did disco worse than themselves and sold it as Eurovision.) They did manage to sell synthpop to them using MTV, but New Order were being New Order and refusing to play pop star, not actually making a lot of money until they discovered the college rock circuit of the late ‘80s. However, “Blue Monday” is the next step after disco->Kraftwerk->hip-hop.

(The one New Order took directly from hip-hop was “Blue Monday”‘s followup “Confusion”, which was just terrible and I hated it from the moment I heard it. I can imagine all the “Blue Monday” fans who took it to No. 12 just on the band name, going “what the hell was that” when they got it home.)

(And there’s their contemporaries and fellow Factory artists Section 25, with “Looking from a Hilltop,” the one Section 25 song I’ve ever liked even slightly, which also went down a treat in New York. And of course their utterly undanceable non-hit “Hit” was sampled by Kanye West.)

I’ve been slightly put off “Planet Rock” since the news of Afrika Bambaataa’s habit of molesting teenage boys came out. But it remains of towering musical importance. Art and artist, eh.

And of course there was tremendously more to it than just these couple of threads. Because everything always happens all at once.