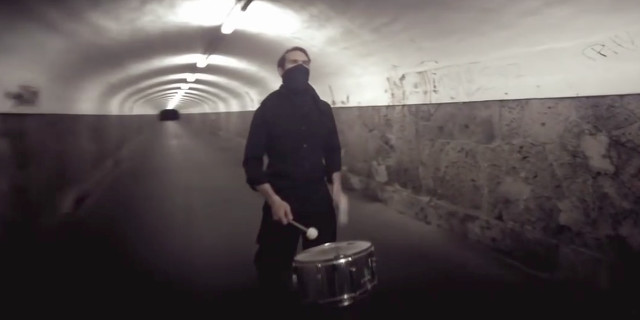 Death in Rome do neofolk covers of pop. They play live and have a YouTube channel for their music. Above is shakycam video, with good sound, of their entire first show at Wave Gotik Treffen, Leipzig, 22 May 2015, and below is “Summertime Sadness”, off their recent album Hitparade, which is a clearly necessary thing in all our lives.

What’s neofolk? Well. Contrary to the common usage of the tag on Bandcamp, it doesn’t mean “like folk but uh you know, hipper”. It’s an offshoot of industrial music that picks up acoustic guitars to sing about how they totally aren’t Nazis, they just coincidentally like the symbolism. It occasionally requires one to ask questions like “is there such a thing as a good European use of the swastika post-1933?”

There’s also the iterative attempts to skirt totally-not-Nazism until, e.g., your good friend Boyd Rice proudly declares what a huge racist he thinks you are. Whoops!

(When the Bandcamp tag abusers find out what “neofolk” actually is, they frequently hit the roof.)

There’s plenty of neofolkers who aren’t at all Nazis — the tag isn’t quite like seeing a tattooed swastika peek out from someone’s sleeve — but I will allow myself to go so far as to think less of many of them for tolerating the obvious actual Nazis in their midst. Though many are in clear denial about their friends; e.g., Rose McDowall — who is utterly lovely — saying she can’t seriously believe Boyd Rice is any sort of racist.

(“We actually don’t mean it, really. Oh, OK, that guy meant it. And yes, I suppose we can’t actually declare him not one of us, even if we hate him. Well, if most of us hate him. Some of us.” Schrödinger’s Nazi. But one gets to know the dogwhistles.)

The annoying thing is that the music is frequently excellent. (Like the problem that Boyd Rice is a Nazi dick but is undeniably hugely important to the history of industrial music.) Death in June are a really good band! Your lumpen non-art-wanker white nationalist music is for the most part laughably terrible, but this stuff actually isn’t. If they sucked it wouldn’t matter.

I was quite pleased to discover, after Throbbing Gristle’s career of blatant edgelordery, Peter Christopherson with Coil explicitly repudiating Boyd Rice and Death in June on the grounds that racism is prima facie evidence of blithering stupidity:

I’m afraid truth often takes you outside boundaries, and that can cause embarrassment, which as we all know is more painful for us Englishmen than the worst torture. A long time after Coil and Boyd worked together, we fell out because of Boyd’s increasingly racist public image. It wasn’t because of political or social correctness. For us it was just common sense. Anyone who singles out a particular portion of any population for criticism just because they fit into a certain category, whether it be gay or black or Jewish or even female, to us was, and is, simply moronic. Clearly all humanity is filled with good people and bad people, and it’s got absolutely nothing to do with what colour shirt, or skin you’ve got on — or even your aftershave. Back in 1982 or 83, Jhonn, Marc Almond and I were barred from a heavy gay New York fetish club late one night, because of the brand of aftershave one of us had used, which was a real drag because a group of horny Puerto Ricans had just gone in… [laughs]. That’s not racist is it? Those guys were hot! All too often you can judge a book by its cover, but as for people, no chance.

There are a lot of those Death In June derivative, new fascist kind of bands, who just think if they bang a bass drum and intone some kind of rhetoric and play some horns and stuff… it’s just so boring. My politics now are more or less completely the opposite of that, so I wouldn’t be interested anyway, but musically there seem to be a lot of people now who think there is something clever about putting on a little moustache and wearing a grey mac.

But it was all much more deniable back in the day. I slightly boggle in 2016 that an ardent leftist like Fad Gadget made an album with Boyd Rice in 1984. And I saw Boyd Rice/Non and Death In June in Melbourne in 1995. (And they were very good indeed — both with a lineup of Boyd, Douglas P and illustrious Australian drummer John Murphy. Support was Black Lung, i.e. David Thrussell of Snog playing ambient techno. I literally didn’t realise he’d started until twenty or thirty minutes into his set.) But we didn’t have the whole Internet providing the full and inarguable collection of receipts at your fingertips.

Someone’s scanned the entire run of early neofolk fanzine The Fifth Path for your edification, if you feel like learning too much more.

I could write stirring socialist diatribe synthpop as a counter, but Depeche Mode did that and it was crashingly dull except the singles, and even they’re earnestly tedious. On the other hand, some Depeche Mode album tracks or B-sides from that era done as socialist neofolk would probably work. Martin Gore did demo everything on a guitar at the time. Just imagine Leonard Cohen doing “Love In Itself” at about half speed. In 6/8.

(And you know, the guitar-based socialist diatribes that Frank Tovey released under his own name rather than the Fad Gadget band name were just a little folkish.)

In the meantime, Death in Rome have undeniably the soundest approach to resolving the problems with neofolk, and are the band you should be getting heavily into. I’m a Barbie girl. In a Barbie world.

(“swastika post-1933″ line stolen back from Neoreaction a Basilisk)

5 thoughts on “Death in Rome: Max Martin did nothing wrong. And the touchier aspects of neofolk.”