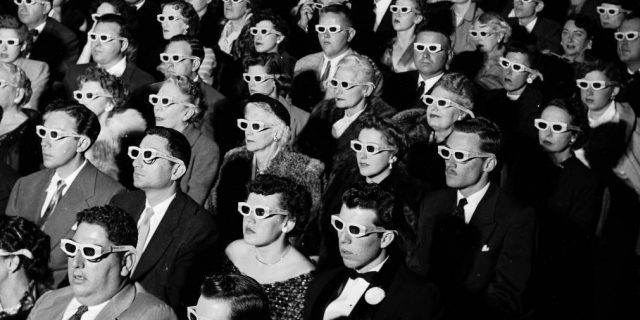 3D technology has been the next big thing for only the last sixty years. It offers amazing improvements over ordinary moving images: darkness, muddier colours, blurriness, headaches from watching for more than twenty minutes and slower action sequences so the viewer doesn’t bring up their last meal.

Literally the only reason for 3D from 2009 to 2012 was so that the entertainment industry could sell you the movies and gadgets you already had again for twice the price. They were actually surprised when it turned out to be awful rubbish nobody wanted.

So let’s repeat history, with Virtual Reality! The music industry is convinced it’s the next big thing, will make it rain money again like CDs used to in the 1990s and will definitely lead us to a bright and happy future of fruit and flowers for all!

So far it’s doing every bit as well as 3D. If that made you throw up …

Facebook paid $2 billion for Oculus Rift, thinking of it as “the next important, or one of the next most important computing platforms.” You can subscribe to cinematic VR!

Vive users will have to pay $20 a year to access premium content like Deepak Chopra’s “Finding Your True Self” and Tyler Hurd’s “Old Friend,” whereas Gear VR users are charged $8 a year for content that also works on mobile headsets.

I also just mentioned VR out loud as I was writing this and had a gamer game industry professional rant at me about the appalling state of VR in games, and the relevant Steam category being somewhat 3D VR-enabled rehashes of old titles. The main group actually interested is failing phone manufacturers.

The Steam promotional page video presents the closest you’ll get to an authentic virtual reality experience in a 2D video image: shakycam that started my eyes hurting and my stomach objecting. (Try the above video full screen.)

Even the notoriously payola-riddled YouTube “let’s play” video sector (a category with which I am intimately familiar, having a small child who watches nothing else) is having trouble pushing this garbage, because you just can’t get a 2D video that presents any sense of it without nauseating the viewer, and no nine year old is going to nag their parents into buying a video game vomit comet.

But don’t worry, there should still be at least a year or two of hype for terrible devices nobody wants: venture capitalists are still investing in VR startups. And government funding remains on the cutting edge of the last big thing.

5 thoughts on “Virtual Reality: it’s the new 3D! Expensive, consumers don’t want it and it makes you throw up.”