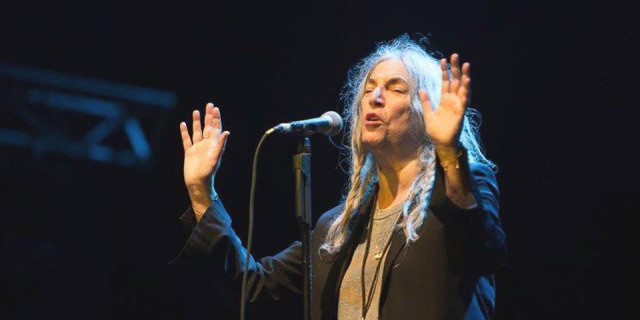 As reported in Junkee, Patti Smith is giving up long haul touring on medical advice. But at Festival Hall last night, which she called a “shitty little club” for all the right reasons, Smith looked anything but frail; more a fiercer, spitting version of the “tiny and somewhat hippyish grandmother” I saw in London nearly 10 years ago.

While the Horses album wasn’t played in its entirety like on the rest of the tour, we were still treated to the title song and “Gloria” in a set that went from the folk of Dylan’s “A Hard Rain’s Gonna Fall” to a shredding “Rock and Roll Nigger” in the encore, where Smith strapped on a Strat and proceeded to make her small amp draped with the Indigenous Australian flag howl with feedback before she ripped out the guitars strings. A fitting farewell indeed.