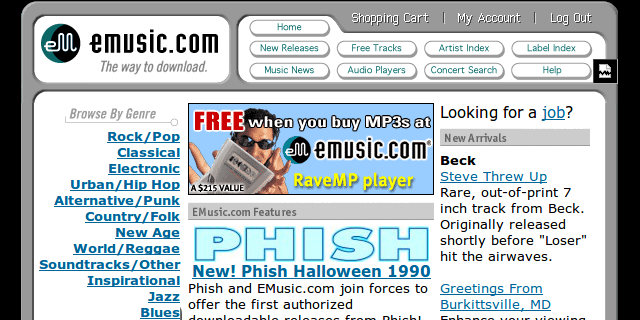 I was a keen customer of eMusic in the mid-2000s. You bought a subscription with a certain number of tracks per month, you bought those tracks, you got plain un-DRMed MP3s. The closest you’d get to what Bandcamp is these days! I got a lot of good stuff there.

The main problem was that they had no majors at all, just whatever indie labels they could do a deal with. Also no self-released indies. If you found a major artist it’d be a crappy post-stardom live album. And more than a few bands trying to leverage the artist’s shit effect.

I eventually gave up, put off by the bad selection and the weird games with what you could buy — a subscription would get you a certain number of downloads a month, which you had to use or lose, and the download process was unreliable and made of annoyance. After I left, the majors buggered the pricing and the bigger indies gave up too. I spoke to someone who worked there around 2007 who confessed their business plan was “how do we charge our users more and offer them less?” which doesn’t sound to me like a winning outlook. He left very soon after.

Having gone through various misfortunes (but then, it’s been corporate pass-the-parcel since 1999), eMusic have returned. It’s not clear the present eMusic has anything much to do with the old eMusic — the ancient artist URLs appear to still work, so that’s nice — but it’s a brand I still remember with fondness. Hopefully they can suck less now. And offer FLAC.

Not that I’ll be giving them money at this stage, I’m afraid — Bandcamp is just a stupendously superior indie record store in every regard, and Spotify if I need my dose of majors. But, eMusic, I’m a middle-aged seriously obsessive music nerd with a healthy income, I’m open to your pitch. “42 tracks for £17.99 per month, 28 for £12.99 a month and 14 for £6.99 a month” — 1998 prices in 2017 is a considerable ask, and I think I’d like to know how much everyone is being paid. But y’know, email me.

10 thoughts on “eMusic returns! Or something of that name.”