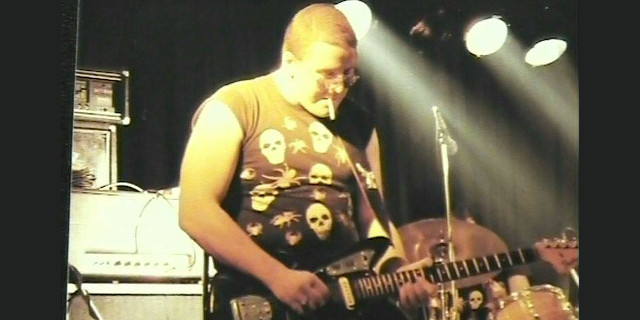 Just heard that Charlie Tolnay died a few days ago. I knew him as the guitarist from Grong Grong and its successor band King Snake Roost, brilliantly noisy pre-grunge indie rock bands from the Adelaide horrible noise scene in the 1980s — which, with the Scientists from Perth via Sydney, invented wide swathes of the thing that hit big as “grunge” in the early 1990s.

Grong Grong were rightly acclaimed at the time — the Australian indie rock scene of the 1980s punched well above its weight in influence, though any individual record would be lucky to reach four figures of sales, particularly if it was weird and horrible noise rather than jangle pop or Radio Birdman copyists — for their stew of “Birthday Party, Cramps, Flipper and Pere Ubu”. Yeah, it was a hideous racket from freaks. But it was the correct hideous racket from freaks.

They recorded one album, which came out on Aberrant in Australia and Alternative Tentacles in the US (Jello Biafra was a fan). They were well on their way to bigger things … but stopped when singer Michael Farkas (half-brother of Tolnay) overdosed on Christmas Eve 1984 and went into a coma for nine months. He eventually recovered, but didn’t play with Grong Grong again until a reunion show in 2009.

Here’s the 2011 film The Curse of Grong Grong by Rob Wright, a great introduction to who they were and what they did, starting with Charlie and Michael at home with the cats:

Grong Grong couldn’t continue without Michael, so Charlie formed King Snake Roost. (Michael later formed another band, Hack.) In 1987 they moved from Adelaide to Sydney and recorded their first album, From Barbarism to Christian Manhood, which I never got much into, though Trouser Press has it about right: “the fat, wriggling basslines of Michael Raymond (since departed) are impaled on rusty skeins of Charles Tolnay’s thug-jazz guitar.” Listening to it right now, it’s not bad, but it’s not as tight as it should be, in songwriting or playing. Mostly you can hear what they would become.

The 1988 single “Top End Killer” has it together a bit more, and even had a video:

The record that got me was Things That Play Themselves from 1988, which is a stone cold masterpiece where everything came together in a perfect moment. I think I bought this from Rob’s Record Bar out of the $5 bin. (Rob’s was the Monkey Music Distribution shop outlet, before they also opened a shop in the city, and a lot of stuff that wouldn’t shift ended up in the $5 bin.) I played it a whole lot over the next year or two. The playing and recording are vastly clearer than the first album. Dave Quinn’s bass, that’s what I wanted to do. 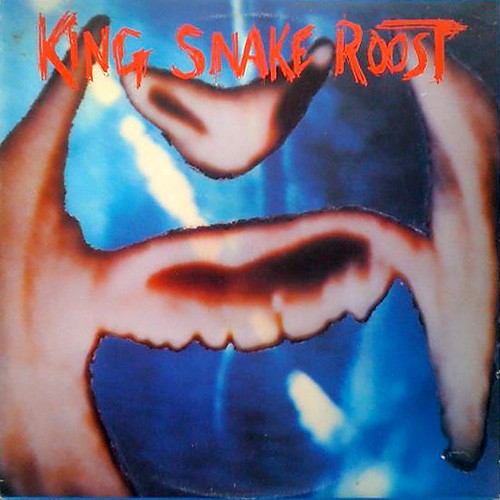 KING SNAKE ROOST: Things That Play Themselves LP (Aberrant) Go to your record store, walk up to the counter with this record and ask them to put it on over the speakers. Then casually walk away and pretend to look through the record racks, and check people’s reactions when the stylus hits the vinyl — especially the grimace on the face of the poor bunny you asked to put it on. You may even like to time how long your friendly and helpful shop assistant will allow this racket to stay on the turntable before deciding to take it off in order not to drive everyone from the store. Yep, I like this record a lot!

The band’s first record was one of those “OK, but …” albums. On reflection, it was probably recorded either too early in the band’s life or too soon after some lineup changes. It didn’t quite gell. As for this one, well. I had a problem when I first heard it because of how the labels are arranged, and I put on side two. As soon as the first song started I knew this was gonna be great. The piece is called “Fried” and combines Adrian Hornblower’s off-the-wall sax and Charlie Tolnay’s very distinctive guitar noise. The overall feel of the piece reminds me of Grong Grong; not really surprising considering the Tolnay connection, but I didn’t think any group could really cover the area they used to own. Now King Snake Roost look as though they may well be the new owners, if not the sole occupants, of this particular musical netherworld — or is it purgatory?

Part of the band’s distinctive sound is that they don’t put the lead guitar way down in the mix; rather, they let the bass and occasional rhythm guitar carry the sound. The lyrics are much better than on the first album, but you’ll still need the lyric sheet to work out what the hell Peter Hill is singing about. His vocal approach sometimes reminds me of Captain Beefheart, where the music suddenly stops and he keeps going, then he stops and the music starts up again. (He sounds more like Alice Cooper to me — Danny.) (Sounds more like a vocalised car crash to me — ed.) Using the word “singing” probably gives the wrong impression as it’s more a combination of singing, narration and recital. Like I said, Beefheartish; you’re never quite sure when the music will stop or start and the same with the vocals. About the only drawback with this approach is that it numbs your ears and brain after a while. I recommend playing no more than one side at a time so as to ensure maximum aural and neurological damage. (Wimpshit! — ed.)

It’s rather hard to describe their sound without actually listening to it in a record store, because you won’t hear it anywhere else; probably not even on those oh so hip alternative radio stations, who are too busy looking out for the next big thing from England to recognise homegrown talent. If this lot came from England or the US, they would be hailed as ground-breaking. Guess them’s the breaks.

As it happened, the US did come to the party, in the form of Amphetamine Reptile picking up the album and doing a CD version. Amphetamine Reptile also released the third album, Ground Into The Dirt, recorded with Butch Vig on King Snake Roost’s US tour, which I got at the time and hardly played, and am playing as I write this and kicking myself and going “WHAT HAVE I BEEN DOING WITH THE PAST THREE DECADES.” Amphetamine Reptile also put them on a few of their Dope, Guns & Fucking In The Streets EPs. King Snake Roost broke up around the end of 1990, however, and Charlie moved back to Adelaide in the mid-’90s.

Here’s some Grong Grong on video: their first gig in 1983, a 1983 practice room session, and from their reunion shows, “Japanese Train Driver”, my favourite Grong Grong number.