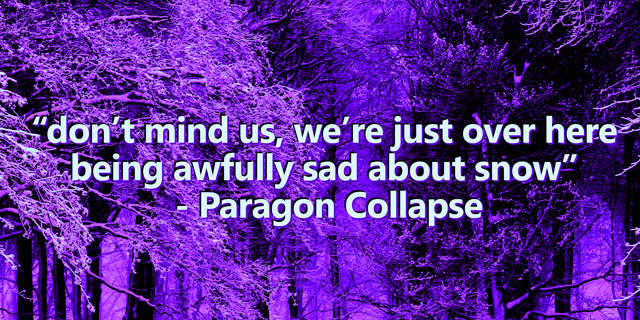 Paragon Collapse have been a band since 2011 according to their Facebook page but a quick google calls that into question – there’s not much info about the band prior to the October 2017 announcement of their debut album with the small Romanian label Loud Rage Music. (Loud Rage didn’t even link an album cover; featured pic on this post by Alli — ed.)

But don’t let that stop you from enjoying the group. Billed as “atmospheric progressive doom metal from Romania” Paragon Collapse’s sound is melodic and easily digestible. Singer Veronica Lefter has a lovely voice that’s a nice diversion from the growling and screams that are so common in metal. Guitarists Alex Lefter and Ion Ciobanu are no slackers – each track from the group has a nicely layered guitar sound that doesn’t fall into wankery or exhausting solos. The sound overall is standard enough that it’s difficult to endorse the “progressive” description of the band (unless you’re going purely on song length – “The Endless Dream” clocks in at 11 minutes and is a bit of a slog). There are no huge surprises or innovations in their sound, but Paragon Collapse has put out some decent chill-out metal with enough noodling to keep you from getting bored and enough flourishes to set them a bit away from the rest of the pack.

The contrast of clear electric violin notes with grungy distortion and the workmanlike approach of the rhythm section is particularly pleasant. Slap bass kicks ass when you’re in the mood for it but sometimes you just want to know what you’re working with before heading into an album, and what you’re heading into here is a reasonably-paced set of jams with some nice high contrast that metal is usually lacking.

Aside from the two tracks released by Loud Rage Music (“The Endless Dream” and “The Stream”) you can get a taste of Paragon Collapse on the band’s Soundcloud page. Try giving “Nirvana” a listen, and checking out the diversion into thrash at the end of “A Whisper of Destiny.”

There’s a lot that’s gothic, mournful, and medieval in the sound. If that’s the sort of thing you like Paragon Collapse is well worth a listen and you should keep an eye out for The Dawning, which as yet does not have a release date. Perhaps if you follow the band on Facebook details will be forthcoming.

update: woohoo 3am emails saying there are no photos of this group and there won’t be any anytime soon. OK …