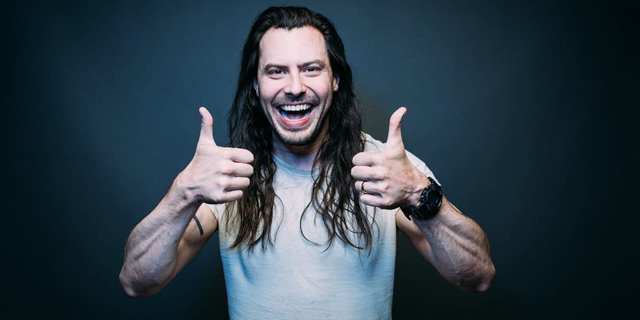 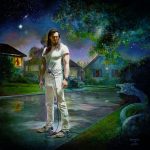 How do you feel about relentless positivity and good cheer? I’m a bit cynical about it myself, but once in a while something comes by that slaps a smile on your face and won’t get out of your head.

Which is why I’m going to have to recommend the new Andrew W.K. album, You’re Not Alone, to everyone. W.K.’s brand of pop-flavored power metal won’t appeal to everyone (especially die-hard metalheads) but it’s a well-constructed rock album with a brawny, operatic feel throughout and an overwhelming sense of accomplishment. You can tell that W.K. is proud of what he’s made and happy to be sharing it.

The music is a surprisingly pleasant combination of sunny pop melodies with a relentless rhythm section. The music is heavy on synthesisers and choir arrangements for the vocals, but it’s also occasionally just plain heavy. “Break the Curse” is a good example of the overall tone of the album – a heavy, dark song that dissolves into a whipped-cream-and-sprinkles-sweet synth line. It’s Fantasia in the Disney sense; brooding gargoyles and dancing unicorns abound.

W.K. is an interesting character and that comes through in his songs. “Music is Worth Living For” is a hell of a jam but it’s also basically the philosophy of W.K.’s brand. He’s a shaggy, skeevy-looking dude whose logo is his own bleeding face but he dresses like a cult leader and talks like a motivational speaker. W.K. spends the whole album telling his listeners that everything is going to be okay, that you’re going to make it, that there are things in this world to hold onto.

The album isn’t short on metal screaming, pounding drums, or dizzying guitar solos but it’s also not lacking for positivity, clarity, and hope – which is a combination that it might be nice to see more of in metal.

If you spend enough time in the more wretched and pathetic corners of the internet (TVTropes) you’ll stumble across the Mohs Scale of Rock and Metal Hardness. It’s a tremendously subjective scale of how hard a band or song or album is, but sometimes it’s nice to have a scheme to quantify, especially if you’re listening to something a bit weird. I’d put You’re Not Alone at a 5-7 musically, and lyrically at a 1-3. Which is about the equivalent of a teddy bear made out of marshmallows riding a centaur who’s wearing bitchin’ armor and waving a battle standard.

If you’re typically into heavier stuff but need a pick-me-up this might be for you; similarly if you’re into lighter stuff but want to dip your toe in the deep end of the pool this is a very accessible and digestible metal-ish album.

There are two “songs” on the album that are actually little spoken word pick-me-ups. “The feeling of being alive” and “Confusion and clarity” are W.K. having a bit of a monologue about his party philosophy, which is basically effervescent self-affirmation and mindfulness. This is fine, but totally skippable if you’re not looking for a tiny sermon in the middle of your party rock album.

If you want to try before you buy, you can stream You’re not Alone on NPR Music.