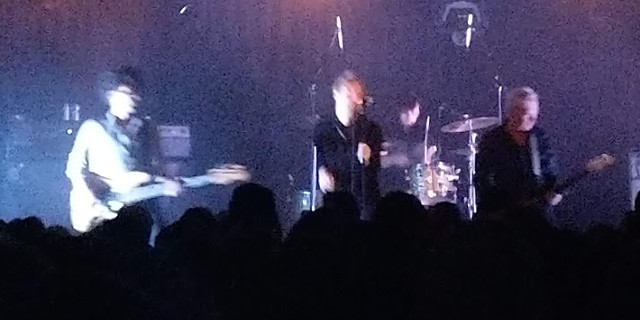 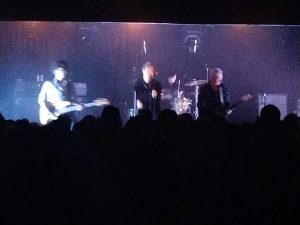 Many decades ago, after I first became familiar with the Gang of Four I was asked what sort of music they play. Without thinking, I blurted out “funk-punk” which, whilst not a recognised style in its own right, is a fair summary of their unique sound and talents. Being a fan of both styles of music, it was inevitable that I would become a firm follower, and the addition of their cynical Frankfurt-School inspired lyrical and content and Situationist strategy cemented everything in place. So it was with great joy I purchased tickets to attend their March gig of the 40th anniversary of their debut album Entertainment! – only to have the gig cancelled.

Nevertheless, the Gang returned in November and this time promised a show. Support acts were The Plovers and Baby 8. The Plovers played a very competent short set, fast and clear, the individual instruments complementing each other well, and with appropriate lyrical content for what was to come. They are certainly worth keeping an eye out for future shows. On the other hand, the larger troupe that makes up Baby 8, played hard and fast, but far more prone to discord rather than clarity. When joined by three brass performers and Sly Faulkner from the Splatterheads, there were nine performers on stage, which certainly makes for quite a spectacle in its own right.

Starting some twenty minutes late, the Gang were greeted with the cheers that one would expect after many years of absence. As an anniversary tour it utterly unsurprising that they made their way through the album, but with a completely different order, starting with “Love Like Anthrax” and “Return the Gift”, the former especially famous for being in Dogs in Space, the latter a particular favourite of mine covering the labour-market alienation and the supposed freedom of having “evenings and weekends”. At this stage, however, several observations could be made. Firstly, this was a live set rather than a studio album, so it had a certain roughness to the sound. Secondly, contemporary vocalist Gaoler Sterry is not the original Jon King, and whilst his on-stage enthusiasm is exceptional, the deadpan vocals of the latter seem tighter. Thirdly, the mixing wasn’t quite right at this stage, a little light on the bass and drum and coming across slightly ‘tinny’.

The latter did not remain the case, which is a credit to the mixer, and there was a real turn on “Not Great Men”, which would be followed by “5.45”, and the spoken words of “Paralysed” by elder stateman Andy Gill. For what it’s worth, this was not on the original album, and “Contract” was dropped in its stead. At 63 Andy the sole remaining member of the original band, there was a certain charm of him standing stoically in the performance whilst the youngsters bounded around him. A short break was followed by “Glass”, “Natural’s Not In It”, and the famous debut single “Damaged Goods”, the latter generating great enthusiasm from the assembled, which is not surprising given the iconic sound and progression with the wry combination of sex, psychology, and commercialisation.

The explicit statement of opportunity costs in “Guns Before Butter” was followed by the popular “At Home He’s A Tourist”, which thundered along and which the band rather unfairly used to describe themselves. If anyone on this planet understands the myriad forms of “culture” it’s the Gang and they have done so for many decades. This is was followed by the dry ‘Ether’ with its reminder that British militarism is necessary, “there may be oil under Rockall“, before concluding with what is a musically more accessible, “I Found That Essence Rare”.

Of course, the album Entertainment! comes in at just under forty minutes and that would be an unacceptable length for a contemporary gig, so the Gang provided an extensive encore, consisting of “Why Theory?” from their second album, Solid Gold (1981), “I Parade Myself”, from Shrinkwrapped (1995), “Toreador”, the very worthy and well-crafted single from their new album Happy Now (2019), “What We All Want” also from Solid Gold, and “He’d Send in the Army”, which appeared in the movie Urgh! A Music War (1981). During this performance Gaoler took to a microwave with a large lump of wood which provides quite a pleasant additional sound, to be honest. The final song of the night was “To Hell With Poverty” which had more than a good portion of enthusiastically joining in.

To summarise, a truly superb gig, which their explicit minimalism (there was nothing special about the light show or costumes and audience interaction was short) mixed with funk twangs and alienation-motivated deadpan monologues. Andy’s tutelage for the relative newcomers has obviously been a high quality adding to their natural abilities and skills, resulting in an excellent result that they can all be proud of. An unexpected benefit of the night was walking out with Andy Gill’s signed guitar. Sure, I had to slap $250 on the table to get it, but I’d been informed that he would be smashing it on stage during “Anthrax”. Turns out that he merely dropped it rather than going full Joe Strummer on the implement, and at worst it will need a new string and some tuning. It was quite a nice way to end the evening walking out with this machine that kills fascists. Having been a music reviewer for more than thirty years and having been a fan of the Gang for almost that long, at the age of 51 it is probably about time I owned an electric guitar. The fact that it comes from Andy is like having a fetish for sympathetic magic.